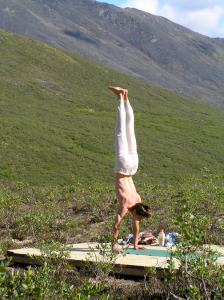 Today Iain was given the last asana of the Ashtanga fourth series by his teacher, Rolf Naujokat. For all the non-yoga people out there, “finishing fourth” is an enormous achievement, beyond reach for 99.99% of humans and maybe 100% of Canadian ex-tree-planters/backcountry hikers/science nerds.

I’ve spent many months carefully studying Iain’s success formula, and it basically boils down to this:

STEP 7 – Once your ego has baked some nice crusty attachments onto the fruits of your hard work, unclench your hands and be at peace. Then, go back to work. 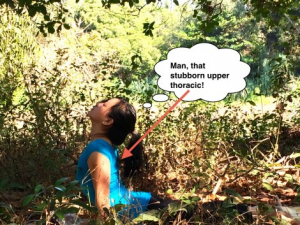 Iain has shown daily patience, peacefulness and strength in his own practice, which is what makes him a special teacher — he lives it. After finishing fourth, no celebrations ensued; instead, it was the regularly scheduled programming of an hour of pranayama followed by systematic house-sweeping, laundry-doing (ours and especially mine, heh) and generally taking care of business.

He even had energy and attention to listen to me wax grouchy about my own yoga practice, how the mosquitos bothered me more than usual today, how I’m impatient that my upper thoracic won’t burst open the way I want it to right now.

How can someone who’s been practicing for 15 years, and who’s slogged through 10x more painful change and uncertainty than I have, still maintain the attentiveness to listen, consider, and reassure? How can this person not have more important yoga-related concerns to think about? How does he prioritize?

The answer is simple:

Yes, it’s absolutely important to prioritize, and there are times when we all have to juggle. But often, our shifting glance is us merely sliding our attention back to ourselves — our worries, our desires, our ego. It’s only natural, a survival technique back in the days of getting chased on the savannah and needing to watch your (diminishing) tail.
Ah, me. The universe is contained therein.
At least, that’s what it felt like when I was once again analyzing my struggle with kapotasana. Or taking inventory of all the emails that I want to write today.
Iain’s been doing kapotasana for years. In fact he practices a few scarier, triple-X versions of it that come up the later advanced series, every day. How does he stay interested in my struggle?

“I have nothing left to teach you.”

Rolf had just given away, pose by pose, the practice that he’d painstakingly learned, pose by pose, from his teacher decades ago. When he gave the last pose, he was smiling BIG — no envy, no withholding, no projection, only love.

I wrote this because I felt touched and inspired by the transmissions that I saw today — teacher to student, partner to loved one. These were the subtle movements of generosity, floating from room to room of our lives like a friendly ghost. No matter what your agenda says today, let generosity float through your house.

It’s so easy; all you have to do is open the door, step a little to the side, and it will flood in.

To everyone in every walk, keep practicing and stay humble! It really works 🙂
–Susan