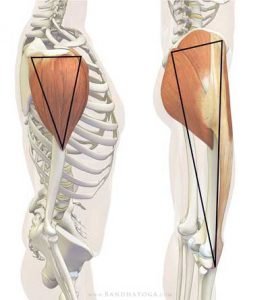 The deltoid of the shoulder and the “deltoid” of the hip.

Knowledge of these relationships can be used to refine and stabilize postures with a lunge component, such as Warrior II.

The “Deltoid” of the Hip

For this reason, the combination of the tensor fascia lata and gluteals is sometimes referred to as the “deltoid” of the hip. 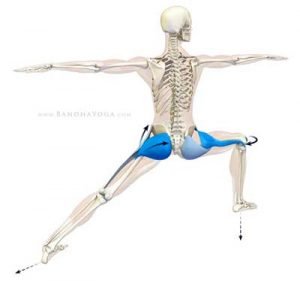 The front hip in Warrior II flexes, abducts, and externally rotates. This combination of movements is known as “circumduction” and it involves the contributions of several muscles. The tensor fascia lata and gluteals produce the abduction component.

Depending on the position of the joint, each of these muscles has several possible actions which can synergize or oppose one of the other muscle’s actions. Throughout the range of motion of the hip, the TFL and gluteus maximus form an antagonist/synergist pair.

In Warriors I and II, I bring the front knee in line with the hip and ankle and then gently press the sole of the foot into the mat. This activates the TFL and gluteus maximus, respectively (the quadriceps also engage). Press the back foot into the mat to stabilize it and then gently attempt to drag it away from the front foot. This acts to extend and abduct the hip and stabilize the pelvis. I balance these cues for the front and back legs and ease back on muscular force as I attain stillness in the pose. 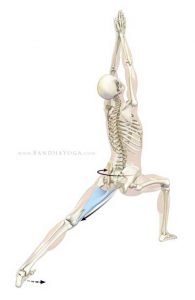 Engaging the back-leg adductor magnus in Warrior I.

As an additional refinement, I engage the adductor magnus by gently attempting to drag or “scrub” the back foot inward towards the midline (adducting it). Because the foot is constrained by the mat, the force of this action is transmitted to the origin of the muscle, as shown here. I have found that this cue works especially well in Warrior I for refining the position of the pelvis.

The overall effect of these actions is to produce a series of forces that stabilize the asana from the foundation to the core. I get a feel for these cues first by using them in a shallower variation of the pose and build the muscular engagement gradually. This helps with stability and awareness.

Always, in your particular case, consult your health care provider before practicing yoga or any other exercise program. Always practice yoga under the direct supervision of a qualified instructor. See full disclaimer here.