Dark Night of the Meniscus

Home  /  Articles  /  Dark Night of the Meniscus
by
Karen Kirkness

So many yogis are dealing with knee issues. I’ve heard these maladies described as: clunky, dodgy, sore, noisy, tight, overstretched, tender, and painful. One of the common sources of these sensations is the meniscus. The meniscus of the knee is a fibrocartilaginous disc whose name is derived from the Greek “meniskos” or crescent, for its crescent-shaped appearance on the tibial plateau.

The meniscus is a team of two sections that correspond to the medial and lateral condyles of the femur. The lateral and medial menisci distribute the weight of the body to reduce friction along the smooth surface. Blood supply to the meniscus flows from the periphery to the central meniscus in youth.

As we age, blood flow decreases and connective tissues degrade. Because the central meniscus becomes avascular by adulthood, the circulation-requiring process of healing is severely compromised. As adulthood is often when people take up yoga practice, damage to the meniscus becomes a common obstacle many yogis must face at some point in their lives.

To get more familiar with this region of interest, check out the views of the lateral and medial menisci available on Kenhub.

So what can cause this kind of damage to the meniscus in the first place? As I’ve learned from experience, this fibrocartilage often gets banged up as a result of the supportive muscles and ligaments of the knee being pushed past their ability to support joint stability. In the process, oblique forces are then transferred between the two bones, resulting in an unstable tear that might need surgical repair. You can learn a lot more about the various kinds of meniscus tears from a sports doctor, for example on this blog post by Howard J. Luks MD.

So that begs the question, in which activities are we most likely to push our muscles and ligaments beyond their normal range? In many sports, this can happen accidentally when athletes collide or crash, resulting in a trauma. Often, ligaments are strained first, the knee dislocates or subluxates (“pops” out and back into joint), and during this process the meniscus is vulnerable. For us Ashtanga yoga practitioners, there are a number of postures where we are mindfully pushing the boundaries of our knees as an intrinsic part of the practice. Hello, primary series! 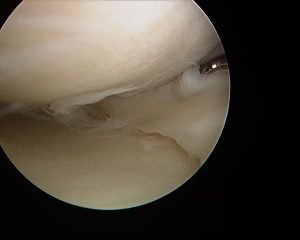 My right meniscus – before surgery. Lots of frayed edges and detritus in there were causing these giant bursa known as “bakers cysts” to appear at the posterior aspect of my right knee. I first injured my right knee as a teenager playing sports. The ACL finally tore one day as I was playing aggressive tennis and lunged for a shot, forcing the knee past its ability to support itself. My surgeon repaired it using a portion of my patella tendon, and I returned to sport. Later, when I took up yoga, I always felt the vulnerability as tightness and clicking/popping, probably symptoms of a meniscus that was likely damaged during the trauma and subsequent surgery. After about ten years, I started developing the bakers cysts as synovial fluid leaked out along the incontinent meniscus through “tunnels” into the overlying bursae. I actually decided to have surgery on this knee after I injured my left meniscus and had a successful surgery on it. 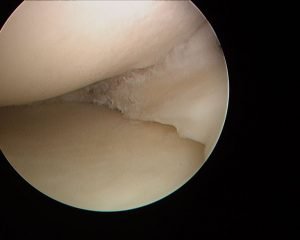 As you can see, my surgeon cleaned things up and I watched the whole procedure on the surgical screen. It was very satisfying! Afterwards, recovery was fast and I have had no more incidence of baker’s cysts or any pain, and my range of motion is better now than it has ever been.

Like many Ashtanga practitioners who have come before me, I had to blow my knees out to get the importance of mindful. I pushed too hard, too soon, and without awareness of the big picture, even though I thought I was being careful. The key to progressing in the series of the Ashtanga yoga practice is to have a realistic picture of where you actually are with your range of motion, and work to your weaknesses rather than your perceived “strengths.” People who are strong want to do handstands, but they should really do backbends. People who are naturally very flexible want to do the splits and feel good in their bendy zones, but really they should be working more on body integration with bandha. Nobody likes to work on their weak areas at first, because it doesn’t feel or look nearly as good as showing off your talents.

My lessons were more energetic; I was cycling too much and burning the energetic candle at both ends. Something had to give, and for me, it was my knees. I thought my strength was doing everything to the max, and unlearning this has been one of yoga’s great gifts. I tore my left medial meniscus one morning in Mysore doing Janu sirsasana C. The knee subluxated (popped out of joint, then back into joint) and I was left with a bucket handle tear that caused a nasty clunk and prevented full flexion of the knee. This was to be the start of a healing journey that was about so much more than gross anatomy, as I addressed the behavioural patterns that contributed to my injury.

The bright side of my knee journey was coming through three surgeries with full range of motion and no further problems (so far). Although I do accept that later in life I will probably have some degenerative issues and arthritis, I bought myself a few more years (decades, I hope) of gliding, pain-free knees. Here are some insights from my experience:

What can we do to make this practice safe for our knees?

The best way to avoid sore knees long term is to focus on increasing your total range of motion. The common advice is to focus on opening your hips to reduce strain on the knees, and while this is certainly helpful, the larger truth is that the whole body has to be addressed. The hips, ankles, lower back, abdominal wall, all the way up through the thorax and limbs, and the entire network of myofascial connectivity that forms our bodies, all of it needs to open on a granular level. Developing a body that is balanced between strength and flexibility will reduce impact on the meniscus. This happens through daily practice of Ashtanga yoga.

My knees are already sore, how will I know if it is my meniscus?

This is where your sports doctor will earn their keep with exclusionary tests to determine what might be happening in your knee . An MRI scan is useful for detecting obvious damage to soft tissues, but many times the only way to tell if your meniscus would benefit from surgery is for them to go in and see. So the best advice is to treat your knee with respect and keep consistently moving the body while resting the knees as much as possible to see if your symptoms decrease. If you’re still having the clunk, pop, or painful discontinuity after 6 months, you should talk with your orthopedist about arthroscopy. It certainly worked for me.

What are some holistic treatments I can turn to for support?

I bathed my knees in castor oil before and after my surgeries, and kept them warm to encourage circulation. I massaged the joint capsule regularly to break down scar tissue. I sat on my turbo trainer, turning the pedals gently to encourage movement without strain. I also took good quality Glucosamine-Chondroitin supplements, and MSM powder. I continued my yoga practice, avoiding all knee strain. You can also stimulate healing with positive energy and lots of rest!

Thank you, Karen. I am an Ashtanga practitioner with a bucket handle tear in my left medial meniscus. I am scheduled to have surgery in two days. Your article was informative and life-giving for me. To know that I am not alone in this experience gives me hope. Thank you again.

Thank you, Karen. I have tear in both meniscus. I’m still not sure which Asanasa I should avoid.