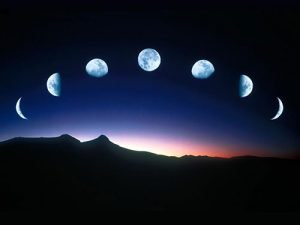 For years I have religiously observed moon days, which means I don’t practice asana on full or new moon. The yogic explanation is that the full moon corresponds to the top of the inhalation when the upward energy of prana is at it’s greatest. So around the full moon we can feel high, energised, emotional and ungrounded. The new moon corresponds to the bottom of the exhalation when the force of apana is greatest so we feel calm and grounded and low energy. At either extreme it’s not a good idea to practice and we are more likely to injure our self.

The explanations I’ve often heard, and in the past given myself, are that are we are composed of around 60% water we are affected by the moon in the same way as the ocean. I’ve also often heard it said that admissions to mental hospitals, arrests and accidents are higher around the full moon. But is there a scientific basis for this and is it true?

So the first idea is that we are made of mostly water and the gravitational pull of the moon causes the whole ocean to move so therefore it must affect us. Well, the idea that the moon causes the tides is only partly true, tides are mostly caused by the rotation of the earth, but more to the point, the moon doesn’t affect water in lakes or rivers or the water in our bathtub…. or the water in our body. The water in the human body is intercellular, that means it is contained in cells doesn’t exist in the body as pure water and is too small a volume to be affected by the moon. So the idea of the gravitational pull of the moon affecting us via the water in our body, on closer inspection starts to look a little thin.

So what about the statistical evidence of higher admissions to mental hospitals, more people being arrested and having accidents at full moon – some police forces put on extra police to deal with it – so that must be true? Well according to every statistical study and meta analysis ever done there is in fact no correlation between anything, including crimes, suicides, psychiatric problems and crisis centre calls, and the moon, not even women’s menstrual cycle.

So on closer inspection all my beliefs and ideas about moon days turn out to have no foundation in fact. I can’t pretend that I didn’t find this disappointing. But on reflection, it doesn’t stop me. I think being in tune with the rhythm of the moon is very beautiful and especially living in a big city it keeps me in touch with nature. I love the symbolism of new beginnings and completed cycles. I love the ritual of it. I just love to look up and see the moon and observing moon days keeps me aware and connected on that level….and… it’s also very nice to have a lie in twice a month!

Melanie nailed it. I never saw the science in it either, but i love the ritual.

This is a great summary of the science Mel.well done!
Interestingly, gardeners since Roman times have believed that seeds sown during a waxing moon germinate more quickly+ I often observe this to be the case. Intact my last batch were a real testament to this claim once again.
Also, my teacher in mysore suggested that moon days off started because teachers had to do puja and fasting around these days+ needed a morning off teaching – as they wouldn’t be in a position to give it their best. His logic suggested that this didn’t excuse students, and we were still expected to turn up regardless of whether or not there was a greater risk we might wind up having accidents or getting arrested on the way there !!
Personally, I like to save up these two bonus days off in a month+ use them when I’m aching and/ or travelling..
Enjoy the lie ins…x

I agree – here is an article I wrote in 2008 on this topic:
Yoga and the moon
I love Ashtanga yoga ! I have practised for nearly ten years and taught for a few. I think it is a great system that suits some people down to the ground.
But it does seem to have acquired a disproportionate amount of baggage – rules and regulations, dos and don’ts, and quite simply, myths.
I have always been perplexed by the Ashtanga tradition of not practising on “moon days” – these being defined as the full and new moons. The reason given, usually delivered in hushed tones, is that the position of the moon on those days makes injury more likely. Okay, you think, grateful for a few legitimate “days off”.
But then you get to thinking – how come other yoga traditions don’t follow this rule? When was the last time you heard an Iyengar, Sivananda or Scaravelli teacher explain that class is off next week because of a moon day? There are moon salutations all right, but I haven’t come across the theory of not practising on moon days anywhere except in Ashtanga-world, which is after all only a small part of the broader yoga community. That immediately makes me suspicious.
So why would the position of the moon affect our energy levels and likelihood of injury? The theory goes that as our bodies are made up of 70% water, then we are likely to be affected by the gravitational pull of the moon, just as occurs with the tides. It seems plausible at first.
There are many other long-held beliefs concerning the moon and madness, aggression, fertility and menstruation cycles, and even natural disasters. While the occasional study suggests some form of link, the overwhelming result from hundreds of such medical and academic studies is that there is no correlation whatsoever between them and lunar cycles (Ivan Kelly, James Rotton and Roger Culver 1996 in particular examined over 100 studies on lunar effects and concluded that the studies have failed to show a reliable and significant correlation, ie one not likely due to chance, between the full moon, or any other phase of the moon).
It is however widely accepted that the moon does indeed play a significant role in tidal patterns. However, this is not the same thing as saying that the moon has an important effect on humans. In fact, astronomer George Abell claims that a mosquito would exert more gravitational pull on your arm than the moon would (Abell 1979).
But even if we accept the moon might affect our watery bodies, how could this possibly threaten injury when the full and new moons are exact opposite ends of the spectrum when it comes to the orbit of the moon? It might make some kind of sense that the full moon coincides with more energy and therefore more likelihood of injury, but the new moon would then be the least dangerous time to practice. It doesn’t add up.
And another problem with “moon days” is that those “chosen” by Ashtanga teachers are often the wrong ones, linked to the night it occurs not the precise timing. For example, if the full moon occurs at 3am on a Tuesday morning, the official “moon day” is given as Monday (as the full moon occurs that night). But then people don’t practice on the Monday morning, which is almost 24 hours from the actual full moon, but do practice on the Tuesday morning just a few hours after the full moon, when the alleged pull of the moon is much stronger. Again, it doesn’t make sense. And if there is a danger of injury on moon days, why do most of the same Ashtanga teachers teach beginners or other non-Mysore classes even on “moon days” ?
But there is an even more fundamental flaw in the “moon day” theory. The gravitational pull of the moon is strongest when the moon is physically closest to the earth, which is determined by the orbit of the moon around the earth. This lunar orbit is completely different from and has no correlation whatsoever with the full and new moon (which are determined by a totally different orbiting relationship – between the moon, the sun and the earth).
If we decide to ignore the scientific evidence that the gravitational pull of the moon is negligible, and persist with the notion that yoga practice is dangerous when the moon is closest to us, then we should observe the lunar orbit calendar (the perigee and apogee – when the moon is closest and furthest from us) not the cycle of full and new moons (known as the synodic lunar cycle)! They are totally different days each month – there is a website that compares them – so the “full moon” day may be weeks away from the perigee when the moon is closest to earth and its gravitational pull greatest.
All in all, there is simply no evidence whatsoever to support the “moon day” theory in Ashtanga, which is probably why other yoga systems don’t follow it either. Somehow though, along with so many other dos and don’ts, it has become part of the Ashtanga folklore.
I suspect somewhere along the line, Ashtanga teachers simply wanted a day off from time to time – and who can blame them? – especially if they were leading regular early morning Mysore sessions. The moon cycles seemed as good a basis as any to calculate when that should be. All power to their vinyasas for having a regular day off, but please don’t tell me there is any scientific basis for it!

Hi Melanie.. you need to check out this book…www.yonishakti.co Its an interesting study on women and our cycles and the importance of listening to our bodies according to where you are in your monthly/life cycle…Every yoga teacher everywhere should know about this stuff.. recently released and written by Uma Dinsmore-Tuli a leader in womans yoga and wellbeing.
I’m telling you about it because I’m a teacher and had not considered these things until recently and I can hardly believe it now that I’m half way through the book!

Check out Eddie Stern’s essay on this: really interesting and give a very logical explanation for the observance of moon days:
http://theconfluencecountdown.com/2013/03/12/eddie-stern-on-moon-days/