Gluteal and Psoas Relationship for Yogis

There is a pattern that has shown itself to me over the last few months. I don’t think that this pattern is a result of practice but probably an underlying pattern that already existed. As often happens, regular practice can uncover any number of problems or imbalances in our body. Hopefully the practice helps to create balance and “fix” them.

The pattern that I’m referring to in this article can show itself in a number of different ways. Unfortunately, that means I have to talk around it for a bit. The way the pattern has shown itself to me as of late points in the direction of the interrelationship between tight deep external rotators (piriformis for instance) and the deep gluteus minimus and medius, and a tight iliopsoas.

Here’s how the pattern has been presenting itself to me. The student has occasional or chronic lower back or SI joint pain on one side maybe even knee pain on the same side. Depending on the practitioner and their level of practice I have also observed difficulty putting their leg behind their head. It’s also possible that the student has a tendency to over tighten their buttocks in upward facing dog, especially on the affected side.

All of these parts and pieces add up to a somewhat dysfunctional hip joint. By dysfunctional I mean, not generally happy. Possibly showing pain in certain movements or postures and even outside of practice into daily life.

As I said I’ve seen a spat of this recently. I just assume that if something keeps showing up in front of me, either I’m being a hammer and only seeing nails or there’s something worth writing about. I’m sure there are a few of you out there who will benefit from a little deconstruction of the situation even if it doesn’t fit you or a student in exactly the same way.

I have written about some aspects of this before in other places. The psoas article that’s been up for years now is always worth a read; maybe it even needs an update? I’ve also written about squeezing the buttocks in up dog. Even sit bone pain or knee problems could be included as possible related issues.

In many of these students I have found that the two sides of their pelvis are not even relative to one another. Usually one side of their pelvis has an anterior rotation relative to the other. An anterior tilt is where one side has rotated down and forward. It is usually (there are always exceptions) the one that has the stronger anterior tilt that complains. There are a number of muscles that can contribute to this such as:

I am starting to think that this difference between the sides of the pelvis may be the common factor in the pattern that I’m seeing regardless of the symptoms that may be appearing. As of late, the symptom has just seemed to revolve mostly around tight gluteals and a tight iliopsoas.

There are many ways in which this can happen, too many to list them all, but sometimes it’s an anatomical difference in size between the right and left side of the pelvis, or an anatomically longer leg. We’ve already mentioned that the tension of various muscles can create this. A fall onto your bottom, or more specifically onto your sit bone can be the culprit. As I mentioned in a recent article, scoliosis can create an imbalance in the pelvis as well.

I would suggest that the practice of yoga by itself is unlikely to cause this to happen. I say this because the practice of postures is usually balanced in terms of stretching and strengthening tissues as well as in terms of front/back and left/right. Some practices however could lead to furthering an imbalance if it already exists.

It is also possible that an injury sustained while practicing could over a period of time lead to an imbalance. For instance a torn hamstring could either create compensations, or a change in balance between the front and the back of the pelvis that other muscles then tighten around.

How To Check Your Pelvis 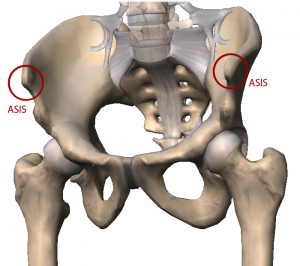 If you do have any of the mentioned issues going on then it might be worth having someone check your pelvis to see if an imbalance might be part of your problem. If you’re curious whether or not there is a difference between the sides of someone’s pelvis here’s how you would check someone else’s pelvis.

Have them stand in front of you while you kneel down and place your thumbs on their ASIS. That’s the bump on the front of your pelvis, sometimes known in yoga as hip points. They can be difficult to find on some people so it may be helpful to have them fold just slightly at their waist to soften some of the hip flexors. Just make sure you have them stand up straight after you’ve located them. Another way would be to have them find their ASIS for you.

You’ll also want to slide your finger up from just below the ASIS so that you hit the bottom of it on both sides with both thumbs. This helps you to feel that you’re in the same spot on both sides.

Most people will have at least a very slight difference in the height of these relative to one another. If it’s a significant difference then it’s more likely to be a component of the problem.

To confirm that one side is actually rotated, you should also check the PSIS, which can be even more difficult to find. This one is the bump you feel on the back of your pelvis on either side of your sacrum. It may be helpful to have the person you’re checking find them for you so you can then place your thumbs on them once again while you note if one is higher or lower than the other. The best way to find it yourself is to make slide all of your fingertips over the approximate area where you think it should be. Make circular motion and see if you can find it. 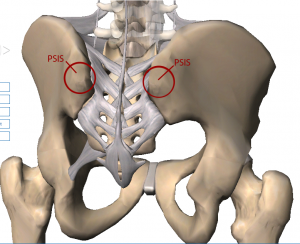 If you found that their left ASIS was lower than the right and then when you checked the PSIS and found that the left one was higher this might lead us to conclude that the left side is tilted forward in an anterior tilt. In other words lower ASIS and higher PSIS on the same side could be indicating that.

Since I went with the more simple and common one side tilted down and forward a couple of things go along with this. It’s hard to say which comes first. If the pelvis is tilted down and forward (anterior tilt) on one side, we would expect to find that muscles that attach to the front of the pelvis, such as the adductors, rectus femoris (a quadriceps), and the iliopsoas might be short and tight.

This could mean that at the back of the pelvis we find that the hamstrings are longer than they should be, maybe even complaining with some pain at the sit bone. We often think long is good but what we really mean is that there is flexibility to get long when needed, not in a constant state of being stretched.

In addition to the hamstring getting long, it also means the area above the pelvis on this same side is usually short and compressed. The quadratus lumborum is the typical muscle people would suspect to be short here and it very well could be, but even the more simple paraspinal muscles or “erector spinae” muscles may also complain and feel tight, or painful due to their constant state of being short. 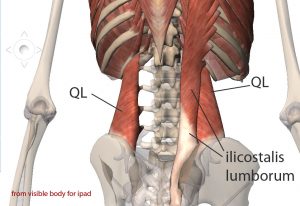 With this pelvic difference it wouldn’t be unreasonable that the gluteals are also not particularly happy. If this is also the case then we might see that the student has a hard time externally rotating their thigh at the hip joint.

What we want to do is factor in what we’ve found in terms of the balance of the pelvis. Then we want to mix in what the student describes, or rather what areas of their body are feeling tension or even pain. Based on the coming together of these there are a number of things we might try to change in the practice or even add specific poses to help bring length to some of those shortened tissues.

Continuing to assume an anterior tilt on one side we will almost always want to bring length into the front of the hip and lengthen the hip flexors. This can be anything from a simple lunge to a supta virasana. Feel free to use any other postures that you know put length into these tissues.

If the gluteals and lower back are involved then make sure the student isn’t over tightening their buttocks in their up dog or other back bending type postures which may lead to more tension in these tissues. Maybe also encourage postures that lengthen these tissues such as pigeon or us the lotus preps that I describe in my youtube video.

Be willing to explore a bit with your students and try things out. Almost always, you can bring awareness to certain patterns that the student has, which takes them further into exploring their own awareness of what they are doing and how they are doing it. This is always good.