Got Sit Bone Pain? – What to do with that hamstring

Home  /  Articles  /  Got Sit Bone Pain? – What to do with that hamstring
by
David Keil

I was in the DC area this month and saw a student that I knew from a previous workshop. At that time Patricia had recently “pulled a hamstring”. Her major symptom was pain at her sit bone (ischial tuberosity) when folding forward, secondary was that it would also hurt when sitting for long periods, especially in the car. I saw her just a couple of weeks ago and she still had the same pain.

Although not my regular advice, the most common way people are told to deal with this problem is to bend their knees in their forward bends. The idea is that by bending your knees you shorten the hamstrings. By shortening the hamstrings you reduce the amount of pull or tension placed on them. It sounds good in theory.

Here’s the problem with this theory. I refer to the hamstrings as two joint muscles. What this means is that changing the position at one of the two joints (hip or knee), changes the end of the muscles that will receive more force from the actual stretching of the muscle.

Assuming that you’ve actually torn your hamstrings (of course a minor tear usually), and that you’ve torn the end of your hamstrings closest to your sit bones, do you think it would be wise to put more pressure on these same tissues? The answer is No, it wouldn’t.

The next question is: Well, what should we do then?

Although I can’t say that this will work in every situation for every individual, this has proven to work for a number of people in this situation. There are always exceptions.

Now, during this most recent interaction with Patricia, I took a moment to give a gentle squeeze to the area of her hamstrings just above the knee joint. (The opposite end from where she was feeling discomfort.) I could see in her face that these tissues were particularly tender and sore. That along with the symptom that she would actually get pain in her sit bone when she would sit in the car clued me in that this technique would probably work for her. The significance of the pain while sitting in the car is that the part of the hamstrings that gets the most pressure in a car seat is the bottom (distal) end of the hamstrings closest to the knee.

The technique I apply is extremely simple, and as I told this student, worth trying for two or three weeks and seeing what happens. Ah yeah, the technique… you’re waiting for it aren’t you? The answer is… Keep your knees straight. That’s it. When you forward bend, either standing or in seated postures, keep the leg extremely straight and don’t go as deeply into the forward bend as you normally do.

Patricia came to three days of practice with me 3 days in a row. She kept her knees extremely straight and guess what? Pain was reducing after just these few days.

I emailed her just before this past weekend to check-in and here’s what she had to say:
David, Significant improvement indeed! I am not bending the knees on the standing or seated poses (like you instructed me) and now I can bend forward with my torso a lot more without any pain in the moment or afterwards. I am now doing Kurmasana and Supta K (almost fully) without pain and on my own!! It is definitely healing, recovering the flexibility. I am really happy about this!!! Looking back, I think that I may have been stuck on a phase of “pain-avoidance” without doing anything to heal the hamstring for good, addressing the problem. Thank you so much for your help with my trouble-making hamstring. Look forward to keep leaning from you (and of course to my entry to the hall-of-fame through the newsletter).
***please note that this does not account for all sit bone pain, nor does it mean that there are not times when it is appropriate to bend the knees. This advice was specific for this student at this time

David Followed this up with: 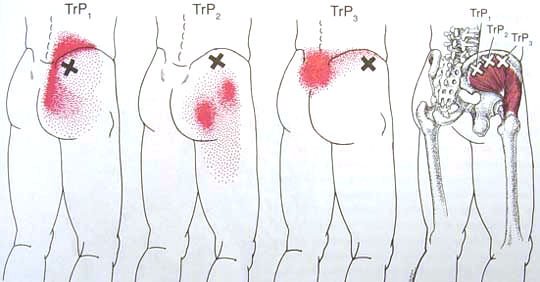 There have been a couple of overlapping issues to the original article on Sit Bone Pain. It just shows that whatever the issue, problem, or pain is… it can be coming from a number of different places. Figuring it out isn’t always so easy. We also naturally try to come to some conclusion about what is going on and sometimes wrongly assume that all, in this case, sit bone pain is created equally. What I’d like to do is offer a couple of other scenarios that are somewhat common. They would also change the way in which you work with sit bone pain. In the original article, I’m specifically talking about dealing with sit bone pain as a result of a hamstring tear or irritation. 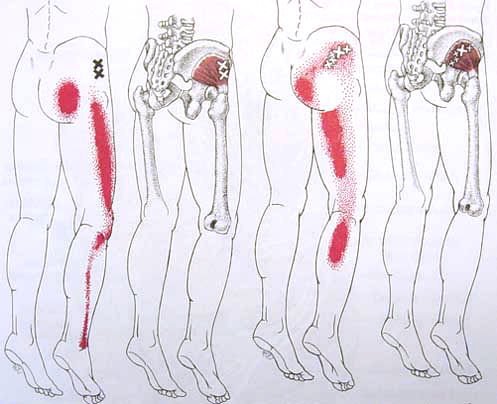 First we have the Trigger Point. There is a trigger point in the gluteus minimus or sometimes the gluteus medius which can create pain around the sit bone. One of the most common complaints that goes along with one of these two being the culprit in sit bone pain is this. The pain tends to increase when I’ve been sitting for a long period of time, in a car or in a seat. Yes, this could be the sign of other things as well, including everyone’s favorite… piriformis.

All I can tell you is this. On at least 4 occasions I’ve met students with sit bone pain who have mentioned that the pain comes on during the day while they’re sitting. I check their gluteus minimus on the side of their hip and… when I press it reproduces their sensation. I realize this may be beyond your skill set so have them check themselves with a tennis ball or something similar… or send them to a Neuromuscular Therapist. 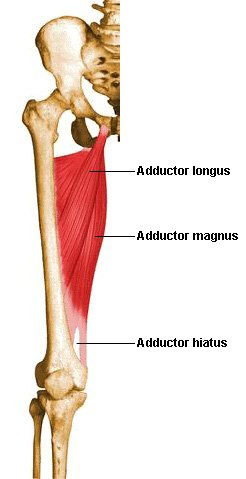 Second, we have the Adductor Magnus as the real culprit. Differentiating between the hamstrings and this adductor is relatively simple. If the sit bone hurts when doing a wide leg forward bend but no while doing a forward bend when the legs are together, it’s more likely to be adductor magnus which has an attachment on the sit bone as well. It’s not because of a trigger point but instead it’s because it probably got injured, usually during a wide leg forward bend! I would suggest that the same posture will be the one to stretch that scar tissue and alleviate the problem.
As always, proceed slowly and be willing to change course based on the feedback of the person you’re working with.

I sat on hard hard bleacher for 3 hours about 3 weeks ago. My left sit-bone has hurt ever since. Mostly when I bend over or stoop to pick something up, but also if I sit very long in one place. I will try the straight knee suggestion and hope it gets better. Thank you.

I have this pain. But could you please clarify what you mean by “gentle squeeze to the area of her hamstrings just above the knee joint. (The opposite end from where she was feeling discomfort.)” Could clarify the areas you palpitated?
semitendinosous or semimembranosous?
http://en.wikipedia.org/wiki/Hamstring

also, there is a pain in the inner groin: ?pectineus or adductor longus

I had the Ischium start to hurt the other day on my right side. It is killing me now and I can feel some tenderness down to behind my knee. I have been sitting a computer quite a bit lately and this came on all of a sudden. I am not a runner and did nothing to injure myself. I have read that it could be related to a prostate issue. Could it also be related to a gastrointestinal infection? I just know it hurts.

I have pain on my right side of hip behind hip and sacrum my hamstring opposite end is tight by massaging this area will the inflammation go away I drive long distance often should I see a osteopath or massage therapist?

I had a total right hip replacement 6 months ago & afterward had a hamstring injury. Last week I tripped & felt a rip in the socket site-ever since my right sit bone has hurt. I sometimes sit on a tennis ball to help. There is not much “cushioning” when I sit so am I actually sitting on the replacement?

recently i hurt my knee in a led class and i took rest for two week. Today I’ve come back to my practice and i’ve felt so much tension in the biceps femoris, but just in the right one. In forwards bends at the hip joint and in my attempts of padmasana at the knee joint. I wonder if my knee pain could it be caused by some kind of tendonitis of the biceps femoris. Actually i’ve suffered Patricia’s pain when sitting for long periods of time so maybe my knee pain is in relation with some kind of injure in the biceps femoris. I write from Spain, sorry about my english ! best regards

Oh wow! I’ve been dealing with this horrible pain for 30 years!! Was a dancer went down into splits without warm up!!! Awful! Like pulling chicken bone! Came from doctor today with no hope!!! Cannot believe so many others suffer the same pain! I love to work out but now realize I’m limited!!! The doctor said not much they can do!!! I’m so depressed!!! I want to do the things that I love to do! Got a prescription for Mobic and pt! Wow! Guess just live in pain!! I am 54 years old tho!

Hi, Since I came out of hospital 3.5 years ago due to an Infection in my Private`s I have suffered with Cronic Pain, I went to the Doctor`s and she said it was my Hamstring, but that won’t last this long, and it`s getting worse, it`s in both cheeks but mainly my right one, then I found your site by accident and read your information, so now I`m sure it`s my sitting bones, I can’t sit for long nor sleep it feels like a Burning sensation Hurst like hell, I’ve been in touch with my GP again she won’t do anything until I’ve had an MRI, I don`t know what to do in the meantime, I can’t go on like this for much longer as the PAIN is too much.