Growing Up In Backbends

Home  /  Articles  /  Growing Up In Backbends
by
Peg Mulqueen 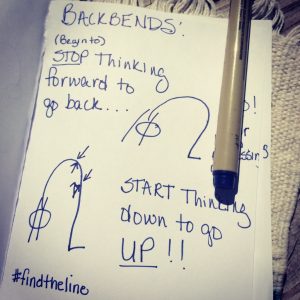 I remember as a kid, helping my slightly OCD mom ready our bedsheets to be folded. We would each grab two corners and pull our ends taut, in our efforts to eliminate all the wrinkles and crinkles we could before we began.

I kind of think of backbends a little like this lately… as I reach in opposite directions, smoothing out my own bumps and bends, creating the clean length and lines my OCD mom could be proud of.

But sometimes it’s confusing. After all, most of us learned to drop back and stand up in a backbend by bending our knees forward to counter our weight as we go back. It’s simple physics, right? Plus, we know if we bend our arms, we can not only brace our fall back but also use those arms to push ourselves up using strength and a little momentum.

All very functional… until it’s not. Part of the progression, but our work is far from over. More growth is needed.
Because over the years, while I’ve learned to reach arms, straighten legs and attempt to pull my body as taut as possible before I fold, there’s still a wrinkle in my method: a major crease in my low back.

David Garrigues first catches this in my ustrasana pose. His face contorts painfully as he watches me push my hips forward as I lean back.

Of course, I thought I was going up… until he brings me over to the wall. Without going into all that, I’ll just let you know now – he proved his point and he was right. Of course.

But not just there, of course. Without realizing, I was also applying this same method in Kapotasana as well as my drop backs. Hips pushed so far forward that it’s no wonder I never felt any weight in my shins and pain in my knees. Forward isn’t up. UP is up.

My backbends everywhere needed to GROW UP! 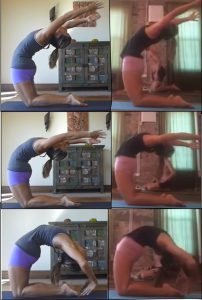 And here’s the kicker… you have to reach up with everything you have: your arms, most definitely suck your belly up – and even your buttocks. That’s right, the butt gets a squeeze upwards too. And no, I’m not just talking anus, but some actual cheek action too.

Now… I know what your thinking and I have also heard a million times (and have repeated it a million more) to unclench. And you absolutely should – especially if you’re squeezing hips forward. Now try a little squeeze UPWARDS. I did and the pictures – as well as the ease of breathe and body I found – are pretty convincing, if you ask me.

These are stills from videos – one taken last year and the other, this morning. Um, excuse me, but did I just grow taller?? And not just that… pay particular attention to my low back and shoulders! Whoa!

Oh, and did I mention that this morning was the first time I have ever managed to reach my feet from the air? Yeah, that too.
Remember, the longest line is also the straightest one too. So don’t just #FindTheLine but make it the longest one possible too!