The arm balances of third series really take all I have in terms of upper body strength – and all I have is often, still not enough. Jen René asked her teacher, Tim Miller, for advice last week.

When she relayed his message, I giggled at the irony of a teacher finally telling me to use my head instead of get out of it!
Of course, I had a feeling Tim was not referring to the head in the way I use typically use it…

Though he’s not the first to emphasize the head’s importance. Watch old videos of Guruji and he says over and over: Head up!
Now, I’ve heard the cue from long ago vinyasa teachers: “it’s like someone is pulling you by your ponytail up towards the ceiling.” (And yes, that IS a cue used.) But see, this doesn’t actually initiate the action that is necessary to elongate. Anyway, who wants to imagine anyone pulling on their hair?

No, this cue is different. And I had a feeling I knew what Tim meant. After all, the head moving forward was a game changer, as in spine lengthener, in chaturanga. This simple action helps distribute the weight so it can shared by the whole body rather than just a pair of shoulders and some locked knees.

The next morning, excited to finally have permission to use my head in my yoga practice, I used it in every place I could. I reached up as much as intently as I reached down … and lengthened forward as much as backward.

And everywhere I could, I used my head along with my foundation, in equal amounts of intensity, to create a tensile strength. 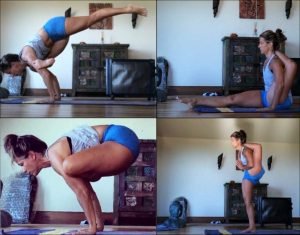 The result? The thoracic spine, a place I typically round, found new length like it’s never had before. And just as in chaturanga, my body felt lighter with the weight, more equitably distributed.

In other words, this mind-body connection isn’t just a subtle and elusive concept but also a very applicable and practical necessity within our asana practice.

Go figure … the head and body functioning on the same plane, both
figurative AND literally!