Is Your Hip “Pinching” in a Twist?

This situation can show up in parvrita parsvakonasana, ardha matsayendrasana, marichyasana C, or other twists. The sensation is anything from mild discomfort to an ice pick sensation in the front and inside of the pelvis. The most common description however is that it seems as though something is getting “pinched.”

This is a situation that I’ve come across a number of times in my travels. It’s not limited to beginners or any particular level of student. The most extreme case I came across was earlier this year in Warsaw, Poland. More recently there were students in Tampa, Gainesville, and Savannah. Is it an epidemic of the “pinching” thing!?

The situation that I come across is this. A student is on their way into a revolved side angle or perhaps a deeply bound twist. Revolved side angle happens to be the most common posture where someone will actually voice his or her complaint. As the student is going into the posture they feel anything from a mild pinching feeling to a sharp spot of pain as they fold and twist into the posture.

My best guess at the problem is that it is some sort of cramp of the iliopsoas. I say, some sort of cramp because I’m not sure that’s what’s going on fits the classical definition of what a cramp is. Either way, my experience tells me that this muscle, particularly the iliacus portion is in some state of spasm or cramp in this situation. 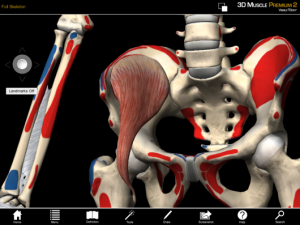 I have dealt with this situation so many times now that I feel comfortable telling people what the problem seems to be and how to help. Regardless of the posture it happens to show up in, I do the same thing. In simple terms I get my fingers inside their pelvic bowl staying close to the bone and gently and slowly press and rub the iliacus muscle. Rarely if ever do I try to get on the psoas itself. See the video at the bottom for how to treat your own hip “pinch”.

In 99% of cases, this reduces or eliminates the pinching feeling if the student tries to do the twist again immediately. That part is amazing enough that something so simple can create a change in such a short amount of time. It’s the bigger question that has no simple specific answer. The question is, why does the iliacus and possibly the psoas major finding itself in this “cramp” when doing postures such as this.

Iliacus and psoas major are both flexors and external rotators of the hip joint. Some books describe its ability to adduct the femur as well. I think it’s this combination that shortens the muscle so much that we end up with our “pinching” feeling. Although not always easy to see, when we do a twist the femur is often externally rotated, flexed and adducted! Making these muscles as short as possible. When muscles get into this shortened position, and engaged, they just have a tendency to cramp up.

Here is a list of potential and possible contributing factors to these muscles being short enough that in our twists they go into a cramp and create that “pinching” feeling:

Whenever I present the psoas in workshops these days I always suggest to people that they should not try to directly strengthen their psoas. This isn’t to say that nobody needs to strengthen his or her psoas. What it means is that we need to assess the state of our psoas before deciding whether it needs to be strengthened or stretched or have nothing done to it. Without the right information, throwing some strengthening exercises onto your psoas can lead to a number of problems, including back pain.

Instead what I tell people is to establish a relationship with your psoas. Try to understand where it is, if it’s tight, weak, strong and then go from there. By relationship I mean, be clear on where it is, what its function is and also try and move from it and access it while in postures.

Lengthening is almost always an option. This is especially true for the iliopsoas and can be accomplished with simple postures such as lunges and supta virasana. Putting length into muscles can make them stronger as short tight muscles tend to be weak and generally unhappy.

My dear friend in Warsaw had the worst case of this “pinching” feeling I had ever seen. As he described it to me, he was sure that there was a boney deformation at his hip joint. He believed that this stemmed from a childhood problem at that hip joint. His mind seemed convinced of it and as a result of this boney deformation he was unable to bring his thigh to his chest or adduct it. He could hardly flex his hip more than ninety degrees with his knee bent.

All of us with our knee bent should be able to bring the top of our thigh to our chest. Not my friend. In addition, he could not adduct his femur toward his midline. When he tried either of these he felt what he described as a bone hitting another bone and a knife or ice pick on the inside of his pelvis. When someone uses either of these two words to describe pain, it means it’s a sharp specific point of pain.

My mind was unsure of exactly what this could be. Could he be right? Was there a boney formation there? It was certainly a possibility. Could it just be his bone shape? I really didn’t know and I love this moment of being unsure of what I am going to do and what is going to happen. I love when new challenges arise to force me outside of my comfort zone, I almost always learn something from it.

I’ve been alive long enough to know that I have convinced myself of things that are definitely NOT true. Over the last 15 years I’ve heard countless people tell me what their problems are, only to find out with good assessment and treatment that no such thing is true. Of course, as soon as they realize that it’s not true the problem changes very quickly.

I approached my friend with an open mind. I honestly had no idea what was going on, but it did occur to me that he had an exaggerated case of the “hip pinch.” I approached with cautious hope that I would be able to help him in just a few days while in Warsaw.

The first time I tried to touch his iliacus he screamed. Scared me half to death and I had hardly put much pressure on it. We worked with his breath and I backed way off of what was already not very much pressure at all. This did however tell me what the state of his iliacus was. NOT HAPPY! It seemed like I might be on the right track.

Over the five days I spent with him while he was practicing in a group, we did various postures and I would go over and get my fingers into his iliacus and give it a rub. I would increase my pressure and move the hip around as I was doing it. I would also have him do lunges and supta virasana lifting his hips to stretch his hip flexors in general.

Thankfully after just a few days his tissues were letting go. He was bringing his knee to his chest for the first time in almost 15 years. Adduction was significantly better as well and I’m hoping the changes remain until I return next year.
That’s the worst case I’ve seen in a number of years. I don’t think you would have to do nearly as much as I did repeatedly for any of your students or for yourself but I will show you what and where I go to work with the iliacus. If you have a case of the hip “pinch” let me know if this helped you. You’ll have to be firm with your pressure and probably consistent in getting on it.