Peg Mulqueen draws on advice from her mentors David Garrigues and David Robson to device her three step program to work towards kapotasana.

Step One from David Garrigues: 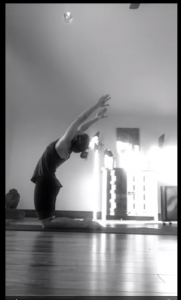 It’s something I’ve written here before about – the lift UP.

It was David G. who first taught me to raise my arms to lift me UP and out of my pelvis while rooting down through my legs. Many of us dump into our low back, which can be further exacerbated when we push our hips forward.

But, remember, the arms don’t just lift overhead – they REACH. This works all the way until you get to the half-way point in which the upper back has to be accessed. Here is where many will either land behind their feet and push their way into their heels by straightening their arms to maintain lift – which is technically ok!

Others will bend their elbows out to the side and take their shoulders to a wonky place to achieve the catch – this is NOT ok. That’s where step two comes in… 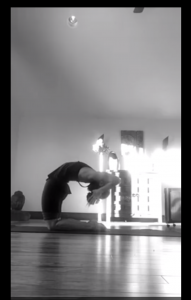 Using the ol’ head in the hands trick.

Bending your elbows, press your wrists to temples and clasp hands behind head. Push your head into your hands and vice versa – using the opposition to access the upper back.

The idea again is not so much that the upper back bends, but that the lift you can access there will keep you lifting up and out of your low back.

I know, I know. The temptation is to swing the elbows out to catch the heels is great because it works. But this totally bypasses the work!
Which brings us now to… 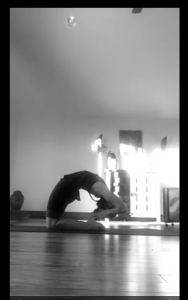 As you get close, keep all the other actions going: strong legs, suck the body up, keep hugging the head and drawing spine into the back but now also reach with your fingers!
The idea is the fingers reach for the heels or at least the feet, where they can latch on and spider crawl their way to the heels. Once you have your heels, you’re home free. And yet …
Catching the heels can be so elusive and feel so far away!!
So I suppose there needs to be one more step:

Step Four is YOU: All that’s left now is for you to NOT give up. You’re so close and yet, like with everything, the final stretch is always the hardest.

SO DON’T GIVE UP! Good luck!