Grab your kimono and get your Zen on. Matcha Green Tea is one of my top three favourite foods. Studies on the health benefits of green tea have gone off the scales in recent years and rightly so. Green tea is proving to be effective against a range of illnesses. It is known as The Elixir of the Immortals however I don’t remember seeing Edward necking it back in Twilight. It must have been in the outtakes. 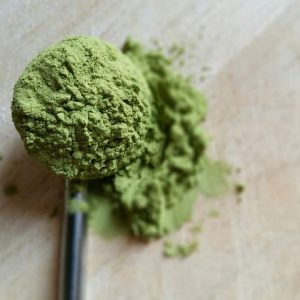 Green tea has been linked with protection against liver conditions, heart disease, diabetes, cancer and stroke prevention, lowering blood pressure and cholesterol levels, decreasing hypertension, improved memory, protecting the skin from UV damage, preventing tooth decay and increasing exercise endurance. Why would you not drink it?

Unless you have been omm-ing in a cave, it is common knowledge that green tea is a rich natural source of antioxidants due to a group of polyphenols known as catechins. Studies have shown these polyphenols to slow aging, fight viruses and diseases, while protecting the body against the ravages of free radicals. News Flash. Free radicals are bad news. According to the ORAC scale, one teaspoon of matcha green tea powder (1.5g) provides the antioxidant equivalent of 230g of broccoli, 85g blueberries and over 137 times the antioxidants of regular steeped green tea.

Matcha is only grown in Japan, where local farmers cultivate it by traditional methods, from growing to grinding. Several weeks prior to harvest in the spring, farmers cover the tea plants with bamboo mats or tarp, gradually reducing the amount of sunlight that reaches the plants. This step increases the chlorophyll content and turns the leaves dark green, giving matcha its distinct green colour. After harvesting, the leaves are steamed and then air dried. Next, the leaves are sorted for grade, and then de-stemmed and de-veined. At this stage, the leaves become tencha, the precursor to matcha. The tencha is then ground and becomes matcha. Chlorophyll and amino acids give matcha its unique rich taste.

Matcha made in the traditional Japanese style is whisked with water which has not reached boiling point. Matcha contains L-theanine, an amino acid known to relax the mind. Om Shanti. 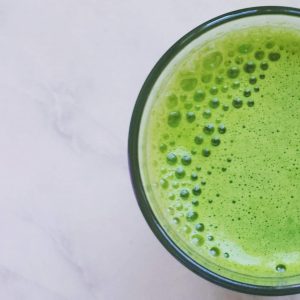 Add all ingredients to the blender and blitz until smooth. Do not serve with chopsticks 🙂

Super Smoothies
Smoothies are a meal in a cup. Breakfast on the run. Missed lunch? Grab a smoothie to get you through till dinner time.  During my studies at Matthew Kenney Culinary, I learnt that smoothies are not just about chucking whatever you fancy in the blender. There is a structure to achieving the most nutritiously dense and balanced creamy smoothie.

There are four main components to constructing the ultimate vegan/non-vegan smoothie. The base can be coconut water, fruit juice or milk (hemp/nut/soya/moo).  The core is the overall flavour of the drink which is determined by what fruit you use. Using a combination of fresh fruit and frozen fruit such as a banana eliminates the need for more ice and lends a cooler and creamer consistency to the drink. Next we have superfoods, enhancers or additional flavour seasonings. Adding spirulina to your juice or smoothie is so last season. Now we have hemp seeds, goji berries, chia seeds, macqui, acai, bee pollen, camu camu, maca, moringa, coconut oil and flaxseed oil.  The list goes on and on. Special seasonings can include vanilla pods, doTERRA essential oils and spices.

When choosing an additional superfood choose carefully and think about overall flavour balance, visual appeal and what you are looking to get from your smoothie.  Energy = maca; clear skin = hemp seeds; extra hydration = chia seeds. Experiment and enjoy and share your creations tagging #wickedwholefoods

Check out more from Tara-Lee on her magazine page!