Nerve compression in the neck, shoulders and wrists from yoga practice

Home  /  Articles  /  Nerve compression in the neck, shoulders and wrists from yoga practice
by
Niki Vetten 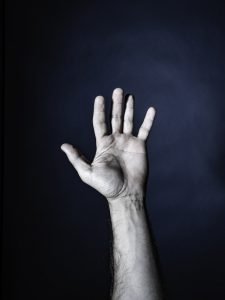 It is quite common for yogis, particularly women, to develop wrist pain and numbness or tingling in the whole hand or individual fingers, either when they are doing arm balances or Chaturanga or at night if they sleep with arms raised above the head although these sensations subside if the arm is placed alongside the body. Such symptoms should be taken very seriously if the numbness becomes constant because nerve compression causes weakness or even paralysis of the muscles in the hands.

Clear-cut medical diagnosis of nerve compression symptoms is often difficult and controversial. Wrist pain is frequently diagnosed as Carpal tunnel syndrome (Median nerve compression); however, nerve compression and pain caused by yoga originates in postural problems and imbalance in the muscles of the arm, neck or shoulders, not just the wrists.

Although it’s commonly taught that good alignment prevents shoulder problems, no amount of perfect alignment can prevent muscle imbalances developing over time if a yoga practice is treated as body conditioning and biased towards poses that strengthen the chest and abdominal muscles, especially if yoga asana practice is the sole form of exercise.

There are a number of different nerves in the arms and the location of the tingling sensations or pain in the fingers or hand will identify which nerve is being compressed. Diagnosis and treatment of crushed nerves is complicated because nerves can be compressed at different or even multiple places in the arms, neck or shoulders – these are sometimes referred to as double or treble crush syndromes.

Surgery is often recommended to free trapped nerves but doesn’t necessarily help because the muscular conditions that created the trapped nerve will remain and be perpetuated by continuing with a yoga practice that caused it in the first place. Muscle release techniques and massage tends to give temporary relief and sometimes makes symptoms worse, for the same reason. Nerve compression can be resolved without surgery by consulting with a Biokineticist who can prescribe appropriate exercises and stretches.

Below are common types of nerve compression that occur in yoga, besides Carpal tunnel syndrome:
Ulnar nerve compression causes tingling or numbness in the last two fingers and outer edge of the hand and is commonly the result of bad posture: Yogis can develop very round shoulders, a forward-tilting pelvis and a forward head position from doing abdominal crunching exercises, particularly those designed to strengthen the Psoas muscle. Tension in the shoulder girdle translates into tension in the arm muscles and elbows, and abnormal pressure on the wrists. The main sites of compression are

Thoracic outlet syndrome is compression of nerves and blood vessels at the neck, common in people with elevated Scapulae (tight upper Trapezius and Levator Scapulae) and tight neck muscles – especially the Scalenes – and is considered to be a cause of winging shoulder blades. Ashtangis often develop winging shoulder-blades without having nerve compression and need to retrain shoulder function: mainly the Serratus Anterior muscle. Abdominal exercise is also a contributing factor: crunching exercise strengthens the neck in an abnormal forward position, makes the Sternocleidomastoid muscles tight and causes general tension in the muscles of the neck and upper Trapezius.

Stretching the neck in all directions usually relieves thoracic nerve compression, but stretching the front and back of the neck happens in yoga in Halasana (Plough), Matsyasana (Fish) or Salamba Sarvangasana (Shoulderstand). People who can’t perform these poses because of vertebrae-related problems should consult a physiotherapist or similar for alternative stretches. Bear in mind that these poses stretch the front and back of the neck, not the sides. Stretching the neck while seated to the sides at 45 and 90 degree angles is very important for lengthening the Scalenes and Upper Trapezius and should be included in every class.

Coracoid pressure syndrome occurs when the Pectoralis minor muscle that stabilises and anchors the scapula to the chest wall at the front of the body becomes tight, compressing the nerves and blood vessels that travel under the muscle and down the arm affecting circulation and nerve impulses so that the hands are often blue in colour and have tingling sensations. The Pectoralis minor shortens when a person has round shoulders and tight biceps.

It is possible to have a strong yoga practice without experiencing nerve compression symptoms but this requires careful attention to sequencing: muscle imbalance in the upper body is common in yoga and the Biceps muscles are typically tight and underdeveloped and the Triceps overdeveloped. Healthy shoulders require both pushing and pulling movements and pulling doesn’t take place in a standard yoga class – pushing strengthens chest and Triceps muscles while pulling strengthens biceps and scapular stabilisers – the Rhomboid and lower Trapezius muscles that are essential to good posture. Headstands, handstands and Pincha Mayurasana strengthen these scapular muscles and need to be practiced as much as poses that strengthen the chest. Pulling exercise to strengthen the Biceps is essential to maintaining healthy arms and shoulders with vinyasa-yoga practices, especially Ashtanga.

Popular ‘core exercises’ in plank position and various forms of abdominal crunching may be helpful for beginners but these should be discontinued once a useful level of strength is reached. Core strength is in the poses themselves: for example, Vasistasana and Purvottanasana open the chest and shoulders are good core strengtheners but are usually overlooked in favour of exercise that tightens up the front of the body. The need to crank out repetitions of some variety of abs-exercise represents a workout mentality rather than a yoga practice and has extremely bad effects on body posture and shoulder positioning over time.

Women who aspire to gymnastic prowess should consider appropriate gymnastic training rather than considering a yoga practice suitable conditioning for the upper-body. Men have larger upper-bodies and can achieve the necessary upper body strength for these poses quite easily without as many negative side-effects. Although women can develop very strong upper backs and shoulders, they need to approach upper body strengthening carefully or suffer the consequences.

i am a massage therapist and having issues with my right hand going numb and painful while sleeping.
Looking for ways to help myself.

Massage therapists tend to have 2 issues: tight forearm muscles from the work their hands do and mostly unavoidable postural problems from working on clients, both of which can cause nerve compression.
Strengthening the fingers and wrists in extension can be helpful to reduce overall tension in the arms and shoulder-girdle; massage tends to make the finger and wrist flexors strong and tight and it often helps to balance strength in the extensor muscles. Regular, comprehensive stretching of the fingers and wrists in all directions is essential.
Have your posture assessed by a trained professional and follow their suggestions but in general, massage therapists can expect tight pectoral and pectoralis minor muscles, together with protracted scapulae and a lot of tension in the Rhomboids and Upper- and Lower trapezius, all of which can contribute to nerve compression.
Massage of tight shoulder muscles is often extremely counter-productive: those muscles need to be strengthened rather than released and the chest muscles need to be opened, especially the pectoralis minor. Exercise and stretching are usually the most helpful approaches

thank you so much for all your information. I am a personal trainer for 30 yrs pushing and pulling clients. I got totally into vinyassa flow the last 3 yrs and now have a neck injury and occasional numbness down both arms. Can’t blame the teachers, only myself for getting caught up in my plank strength! I knew my practice wasn’t balanced. Thank you again for all your info and I will try to be a more balanced yogi which is what its all about

Hi, just come across this very helpful article. I’m looking for some urgent advice! I attended a first yoga beginner class yesterday. One of the poses was a twist where I was laying on my back with arms wide and chest open. I had to trace one hand across my collarbone and stretch the arm so that my fingers extended past the end of the other outstretched arm, whilst using the opposing leg to anchor (not sure what the pose is called). After completing the exercise I felt something wasn’t quite right but didn’t think anything of it. After the session I noticed a numbness across my left collarbone which has since become more pronounced across that top of my shoulder and top of the pectoral muscle. It has not gone away overnight and I’m extremely worried about it.

Is this probably TOS and is it possible to do permanent damage with one move like this? I’d didn’t even feel any pain at the time.

What can I do to alleviate it, will stretching exercises help or make it worse? It doesn’t seem to be improving!

Sorry to hear that you are uncomfortable. I don’t think it’s the start of TOS but since it’s your first class, it’s likely that some complex of muscle tension got triggered and you are experiencing a muscle spasm that could be pinching local nerves.
If you don’t feel better tomorrow, I recommend that you see a physical therapist for assessment who can prescribe suitable exercise and or stretches. I can’t make any blanket recommendations, somebody needs to examine you first. What you are experiencing could be local, within the painful areas, or it could be triggered by other muscle tension elsewhere, so examination is necessary.

Hope that helps, feel free to ask if you have any further questions