I don’t know if you know this about Ashtanga – but backbends are a pretty big damn deal. When I started, no one cared that I could stand on my hands. No one wanted to see me float or jump or balance on my arms. No, they wanted to see my backbend.
Only, I didn’t have a backbend. I had more of a coffee table.

I’ve always known this had to do with more than just the shape of my back. Standing up from and the dropping back into a backbend was horrific for me – which I didn’t learn to do until I was 42 years old. Just one look at my picture form 2008 and you’ll understand, it wasn’t pretty and used a lot of momentum to get the job done – hurling myself forward/backward and praying legs/arms would catch me. Which sometimes, they didn’t. 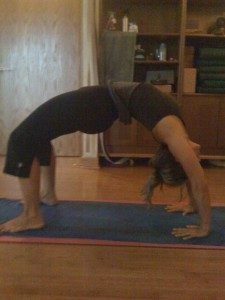 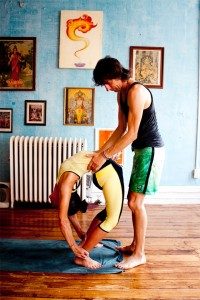 Backbend on a good day now

Consequently, there have been times my low back not only ached – but actually hurt. Stabbing pain that could for periods, leave me sidelined. It was horribly frustrating and of course, painful and scary. I loved (and when I say, loved – I really mean I wanted to rip someone’s eyes out) when someone would correct my alignment as if me turning my feet out or clenching my butt was laziness on my part. It wasn’t. I was doing everything I knew how to relieve the pain.

Both these things were functional and worked. Both stopped the pain – but alas, neither helped my backbend. I needed to stop hearing what I shouldn’t do and start finding out what I could.

My short list included working towards straightening my legs and arms  (thank you David Garrigues for this), pressing firmly into my heels to lift out of my low back, and as of late: forcefully pulling IN the navel and pulling UP the hip bones (which I realize, on a gross level, bandhas – but in my case, I’m just trying to get the back of my pelvis from digging into my low back).
And it was this action I wanted to write about but needed someone who actually knows anatomy to help me so I appear more intelligent. I called David Keil (as I usually do!) to explain in my crude and primitive terms what I think I’m doing – so he can translate. (Apparently, it’s a posterior tilt of my pelvis I’m creating by pulling up the hip bones. See? Don’t I sound smarter, already?)

Poor David, just home from the dentist with half his face numb, he still answered the phone. Anyhow, good thing for you, I take good notes. Because soon we were on to a subject far more interesting than the tilt of my pelvis – the difference of size and our individual proportions.

The shape you make in a backbend is relative to your proportions, where you most naturally move from, and of course, your overall flexibility level.

If we think about things from a proportional point of view you can think about a backbend in four major parts:
Foreleg (shinbone), Thigh (femur & pelvis), Spine, and Arms. 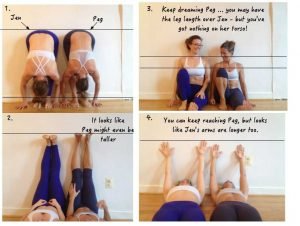 You can think of the foreleg and arms like our very own personal blocks. How high you put those blocks will drop or lift the next parts up the chain. If you’ve never done this before, put your feet up on a stack of a few blocks and notice how it changes where pressure is or is not in your backbend. Do the opposite and flip some blocks up on the wall and place them only under your hands and notice where the pressure is or is not when you go into a backbend. 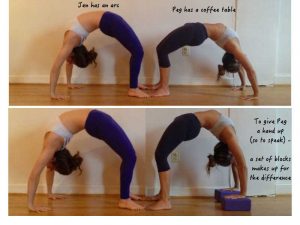 So, if you have short forelegs relative to long femurs, this by itself is going to change the angle of that femur, right? The end that is connected to the foreleg is either going to end up higher or lower relative to where the femur connects to the pelvis. this is important because if the femur is angled down more, it’s probably going to pull the pelvis down and forward, what we call an anterior tilt.

If the foreleg is longer, less pressure goes into the front of the pelvis and it’s easier to have more of a posterior tilt in the pelvis. In other words, less compressive to the low back!

Then of course there is the other side of the backbend, the arms. The same ideas apply there. It’s either going to lift or drop the spine relative to the pelvis and legs on the other end. If you have longer legs and a shorter torso and arms, you’re more likely to be putting pressure into the lower back.

Why? because the longer legs have the pelvis higher which means more distance to the floor for the spine and arms. Depending on how open the front of the legs are (hip flexors in general) the pelvis might not be held in more or an anterior tilt and the arms still have to reach the floor so the pressure goes into the lower back, where we all naturally backbend from the most.
Basically, this all boils down to one thing: size does matter. Well, proportionally speaking, anyway. And this will matter in nearly

ALL the shapes we make. Meaning, some will be more or less accessible depending not just on our strength and flexibility – but also our individual structure.

Once upon a time, I would curse my body’s imperfections – places I felt were too big/small/wide/whatever. But now, I watch myself and others in the Mysore room learn how to navigate this asana map we’ve been given – using what we have to make these complicated shapes and learning to fill the voids and change our patterns.
Seriously, size DOES matter. But it’s not ALL that matters. Take another good look at my backbend from 2008. Fascinating, isn’t it? It’s crazy what we’re capable of when we don’t give up.

Who knows? I could even start loving anatomy and calling out body parts instead of just poking fingers into them.
I should note that David Keil is in DC this week giving a workshop on Anatomy and leading a week of Mysore. But it’s kind of cruel of me to tell you this because his week and workshop has actually been sold out for months.
Instead, you should make sure you subscribe to his blog so you can sound smart too.

Oh, and David? You really should start screening your calls. You’re lucky it was just me because you don’t know how many weirdo asana geeky students there are out there…

thank you Peg ! I had to hear this 🙂 I see a lot of awesome Ashtangis with (relative) short legs and (relative) long arms and I’m constantly asking myself if I would ever have the chance to get their levels…. because, of course, of my quite long legs and short upper body !
so you proof that we might find our very own way with whatever our bodies look like. everyone find his way, somehow… :-)))

YES miriam! and sometimes the more we must struggle to find our way – the more we get to learn along the way! i see these challenges more like puzzles, some pieces are harder to figure out – but if it was all so easy, it would also be pretty boring if you ask me! xo

This is great! I was wondering at some point of my practice that i was not really progressing in some asanas. Binding in some marichyasanas or Pasasana is more than challenging for me. I then i figured out that i have Long legs but a short torso and short arms. Poses that seem to be Harder for many students i could achieve easily but binding is always hard:)
Best, Hendrik

Hey Peg, I have the same problem – long legs, very short torso – though my arms are pretty average. Would love to hear what stretches you did to progress in wheel pose! It’s the one hurdle I can’t really seem to find a work around…

I always gets discouraged and often times I get hurt because my intentions don’t look even remotely close to those I see in IG for example. I’m 5” I’m very flexible and my legs are super tiny but it doesn’t mean that I’m getting the best out my poses. Thanks so much for touching this subject.