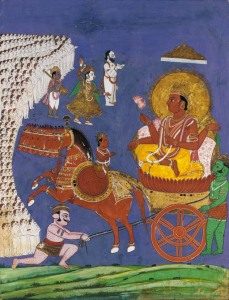 There is nothing that seems to cross all boundaries of yoga styles as clearly as sun salutations. Of course there are variations on the theme, but it seems that all styles do them. Sun Salutations put movement through all of the joints of the body and moves it in many directions. Perhaps we have a little difficulty in finding say, a twist, but many movements are represented.

Since it is so “universal” in one form or another it has always intrigued me and at different times along my journey, asked me to look deeper into its meaning. We are saluting the sun, why? Surya used generally means sun. But Surya is also a god as depicted in the image on a chariot. The Sun is the bringer of life and health.

But sun salutations go even deeper. It is a mode of worship and the most auspicious way of doing the namaskaras is to do 108 per day. Not just by themselves but with mantra that is associated with each movement. You can check out the mantras at Wikipedia.org

Alas, I am just a poor little anatomy teacher, what do I know of these deeper more esoteric things, right? The sun is the seed of life for the entire plane; without it, we are nothing but a cold, dark planet. In a similar way, the movements are the seeds of many other postures. As I’ve already stated we find that sun salutations takes us through a large range of movements. Without doing them first don’t we feel a bit cold and dried up as well?

The other element that I find important in sun salutation is the vinyasa. Regardless of the system or style of sun salutation going on, the breath and the movement are linked together. Tying this together with the namaskaras is the literal translation of the word vinyasa. Vi means “to go”, to move. to cast forth, to conceive, or to start from. NYASA means placing, planting, or prostration. You could combine the two parts as to “move in prostration.”

OK… let’s get on to the anatomy, that’s why you’re here after all, isn’t it? The plan for this little series on Sun Salutation is to take time and break down the sun salutations into each of the major components and explore some of the why’s and why nots. As with all things, you can rationalize or argue any position you like and these are just my observations.

The Body in Action

The main thing that I love most about sun salutations is that the body is in motion for so much of it. Although we often talk about the body in static postures during a yoga class, for me, there is much more revealed in the way in which all the parts integrate and function together.

I am often looking at a series of movements as they happen and here is some of the thoughts or questions that float around between my ears.

Again, These are the pieces that I would be processing without thinking about it. Of course, none of them get to the interpretation of what it all means, but that’s the point of this article series. There are a variety of ways that sun salutations are performed. There are also good reasons to emphasize different aspects at different times for students depending on the level of their practice and abilities.

There is a lot of work that one can do in Tadasana or Samasthiti. It establishes our neutral place for standing postures. Another way of saying that is that all standing postures evolve from or emerge from this basic standing posture. I know there are teachers out there who spend hours on describing all of the things you “should” be feeling and experiencing in this posture but I’m not one of them. That’s not to say that there is nothing to do. I have kept a more generalized internal feeling of attention through the entire body.

Instead, I use it from the teaching perspective as an opportunity to observe the student and what alignment, or misalignment issues they may have, while static. I then watch them move with and through that alignment/misalignment and let that inform me and the specific instructions I might give to them.

Samasthiti is classically done with the feet together and tadasana more commonly with them at hip width apart. These seem like simple things to do, but not for everyone.

I’ve met people along the way that have legs that bow inward, sometimes referred to as knocked knee. If this person puts their feet together as in samastitihi, their knees would not just touch, they would have to melt into one another or cross in front of or behind the other. These people are an exception to the rule for samasthiti and would have to have their feet separated a bit. I have met some who were forced to keep their feet together and then bend one knee slightly to move it out of the way!

The next issue at the feet is having them straight. Well, what is straight? Are we looking at the inner or outer edge of the foot to determine this?

What is most important to me from an anatomical point of view is the direction that the knees are pointing when standing, walking and moving through postures. Why? Because it’s the knee that is the most vulnerable joint in the leg.
If the knee is straight, the rotation that we see at the foot actually comes from the hip. If the knee is bent, it’s possible that the rotation is happening at the knee joint itself. But the ankle does not rotate.

Any time the foot is going one way and the hip is going the other, there will be force passing through the knee joint. It’s not like we’re made out of glass or anything, however, over time, these forces can add up. So when the feet are not in the place you would like them to be or you decide to change their position, don’t forget to look at the whole leg, not just one end of them.

There is also a lot of attention give to the pelvis and to its position when standing straight in samastitihi or tadasana. Personally, I think the whole, tuck your tailbone thing has been overdone for most people. I get the seed of it, but I don’t think it was ever meant as a gross movement the way I often see people doing it.

First, look at the person and their anatomy. There are certainly people who have a pelvis that is tilted forward and down too much. By too much I mean, it’s a pattern that may be part of other problems for that person. These people may have to retrain certain tissues to get the pelvis in the right place, and yes, they should do the gross movement of tucking their tailbone, or lifting their pubic bone.

If you don’t have this strong anterior tilt going on, then the action is much more subtle. In this case, it’s really about engaging the pelvic floor slowly and gradually, which has an effect on the tail bone directly. This becomes less of a pelvic movement and more of a sacral tilt. If you want to do your head in about sacral movement, check out the post and the comments in this old Nutation/Counternutation article.

This more subtle movement is one of grounding. Whether you’re doing samastitihi or tadasana, you are meant to be grounded and firm.

In part 2 of the sun salutation series we are going to look more closely at the movements and actions of raising the arms over the head. Sounds simple right? I will take a look at what appears to be the most easeful and effortless way to raise your arms.
How many variations on raising your arms overhead have you seen?
Take a look at Part 2 of this series here

[…] The last article in this series was the introduction to the sun salutations series with an anatomical spin. In this article we will be exploring: How to lift the arms over your head. […]