The last article in this series was the introduction to the sun salutations series with an anatomical spin. In this article we will be exploring: How to lift the arms over your head.

It seems as though I have seen hundreds of variations on how students raise their arms over their head to begin a sun salutation. Although it’s a seemingly simple act, it’s not really. I don’t want to get really nerdy and say how amazing the coordination is at the neuromuscular level, but that is the case. We take for granted that if we are not consciously choosing to create the neuromuscular patterns, the body just does whatever it needs to, to reach the intended goal. As many of you who are teachers have seen, the body isn’t always so good at choosing the best neuromuscular pattern for the long-term. 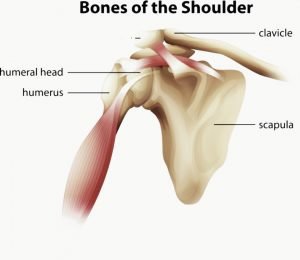 The three bones of the shoulder complex – humerus, scapula, clavicle.

What makes raising the arms over the head so complex is what we refer to as the shoulder complex. This is the coming together of the scapula (shoulder blade), clavicle (collar bone), and the humerus (upper arm bone). Because three bones come together and the scapula is generally quite mobile, the movements themselves get mixed together.

The problems that I see most commonly are probably the same ones you do.

Here’s how I work with the movement of raising the arms overhead when doing a sun salutation.
Personally, I go with the most relaxed way of raising the arms and I rationalize it as a more natural way of raising your arms over your head. The rationalization is based on my own desire to conserve energy. In other words, I want to move in an efficient way that does not engage muscles that have no need to engage. I also see this as an opportunity to use muscles that I will need for similar movements later on.

Take a look at the anatomy of the shoulder girdle in the image. You’ll see that the scapula is sitting at roughly a forty-five degree angle on your back. Your scapulae don’t sit flat on your back. Remember, the rib cage is round! I know it seems like the scapula are flat on your back, but they’re not. This is important because it means that the head of your humerus is not pointing out to the side either but instead pointing more forward. 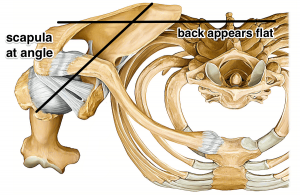 This means that the least amount of effort is needed to raise your arms when you raise them at a forty-five degree angle away from your body. If you were to do this there would be no need for your scapulae to move backward and toward each other which we call retraction of the scapulae.

To make as much space in the shoulder joint itself, we also want to externally rotate the humerus as the arms go up. Because of the shape of the head of the humerus and the shelf that sticks out over it (acromion process), external rotation allows the humerus to move a little bit further before hitting the scapula. Keep in mind that any time you raise your arms over your head, your humerus has hit the acromion process. This is normal, and when it does hit your acromion, it sets the scapula in motion in what we call, upward rotation of the scapula.

Would I go as far as saying this is THE RIGHT way of doing it? No, you can express raising your arms over your head any way you like. As you’ll see as this series on sun salutations continues, I will be hitting on this same exact movement in some other key places that will help it make sense in the bigger picture of the sun salutations and beyond!

Take a look at Part 1 of this series here.