The Diaphragm is Key! Don’t Forget It. Observe It.

Home  /  Articles  /  The Diaphragm is Key! Don’t Forget It. Observe It.
by
David Garrigues 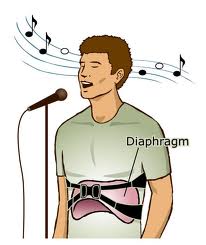 The diaphragm is the main muscle involved in breathing; when you get an experiential feeling of its actions, that knowledge helps you breathe better and thus helps you develop your yoga practice. You can learn to sense the diaphragms anatomical location within the torso and to follow its contraction (inhalation) and relaxation (exhalation) phases. The diaphragm is a large sheet or dome shaped muscle that resembles a mushroom or a parachute and divides the upper and lower abdomen. It has an unattached gathering of fibers called the central tendon at its top that helps give its dome shape.

It attaches to several sets of ribs and has ‘stems’ that are called crura that attach to vertebrae along the front of the lower spine. The diaphragm is both a particularly large muscle and a core muscle. This is significant because, being large,  its rhythm, actions and movements are quite easy to observe. And considering its deep and central location , the basic observation of its actions can take you far within your self,  into the root and center of you.

Here’s an image for you to work with: Imagine that your torso is a vast inner ocean.  And the diaphragm is a giant jelly fish that is entirely at home floating up and down on the ocean currents within your torso. As you inhale experience its fibers contract, move down, flatten and spread and as you exhale experience its fibers relax, move up, bunch together and reform their dome like shape.  Work with this image until you feel that the diaphragm’s coming and going rhythm is THE fundamental rhythm within you;  feel how central this rhythm is and how when you really tune into it,  this rhythm pervades your entire body, and imagine that this rhythm could be the source of all of your movements. 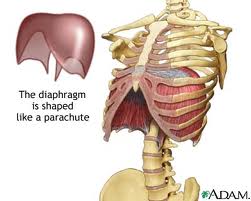 Following your diaphragms actions can lead you to discover and activate bandha’s.  For example,  the elusive and challenging practice of mula bandha can be accessed with more ease and more logic when you approach it through observing the movement of the diaphragm.

Mula bandha is often defined as ‘forcibly pulling up apana vayu’ and causing the otherwise downward apanic energy to flow upwards. The upward movement of the diaphragm during exhalation provides you with the means of finding this redirection, the ‘against the grain’ energetic upward direction that characterizes mula bandha. You can achieve mula bandha by causing your perineum to ride on the coattails of the diaphragm as it ascends the torso when you exhale thoroughly, and there by seal your prana at the root.  Following the grosser rhythm of the diaphragm and then the more subtle rhythm of the pelvic floor is what trains you to ‘master’ your senses, by moving mentally inwards towards center and gaining the ability to discern more and more subtle plays of opposing energetic, skeletal and muscular patterns. 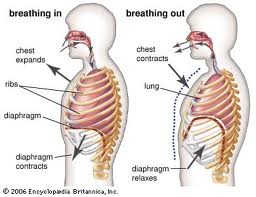 Observing the vertical action of the diaphragm and its influence on the pelvic floor is one key to aligning your self along the axis known as the pillar of light or most glorious (Shushumna).   To be able to sustain your focus along the center line of the body from the base through the crown is one of the rewards of practicing pranayama  partly due to observing the diaphragm within your torso and understanding how to optimize its muscular actions.  Start by befriending the giant jelly fish within,  see how to shape and guide the movements of this large muscle, and see how that skill leads to awareness of the more subtle physical actions such as following the breathing patterns all the way to their ends and awakening the the subtle actions of the bandha’s.

And here’s one more note: because the diaphragm drives the ever repeating cycle of the breath, it has a major role in helping you understand vinyasa. When you study the diaphragm you study vinyasa from a a central vantage point; through breathing you follow the opposing movement patterns that make up the ashtanga sequences. In Ashtanga yoga practice, through combining vinyasa and breathing, you endeavor to generate and to harness the dynamic bio rhythms at the heart of you. That is why Sri K. Pattabhi Jois called Ashtanga a ‘breathing and movement system’. The most accessible way to get to the heart of the rhythm of this breathing and movement system is to doggedly follow the actions of the diaphragm and see how those actions translate into vinyasa, into sequences of rhythmic opposing movement patterns.

See if you can follow the diaphragm’s vertical, up and down actions within the torso, focus on the connection between rhythm in breathing and rhythm in creating actions in your asana’s and in your movement transitions. Each time you effectively tune into the deeper rhythms of your breath, you are in a position to have some small epiphany about your movement or your posture at its source. Go into your earth support and along your glorious axis,  find the immovable state of the asana, get the spectacular view all through the simple act of tuning into the diaphragm and heartily enjoying your breath!

Sorry to all those that were having trouble leaving comments. Hopefully those problems have been resolved. I’m still learning how to get all this stuff working well, so always let me know of anything that is not working. As I change one thing sometimes it affects something else. Post away : )