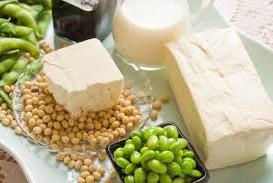 Once known as the ultimate health food for vegetarians and vegans – the ideal replacement for meat and dairy, these days soy is often referred to as dangerous or even evil. So what on earth happened and is it even safe to eat it?
It’s not hard to see why there are health issues around eating soy if you think about how recently the craze began and how quickly it exploded.

Suddenly you had all these people, mostly westerners, consuming huge amounts of a food that their bodies were never used to and their parents and ancestors had never really eaten. All the time believing it was healthy. It’s sold in health food stores, why wouldn’t it be healthy? It’s not really a surprise then that the dangers of over consumption of soy are slowly starting to emerge, even if they are not that well publicised yet.

So what are the issues? For a start soy products are often highly processed. Secondly it’s believed that 90% of soy sold today is GM thus containing a load of toxins and pesticides. But it seems even organic soy can cause health issues, specifically reduced protein digestion and mineral absorption, caused by the high levels of phytic acid and enzyme-inhibitors in soybeans. Basically soy contains anti-nutrients and actually blocks absorption of key nutrients. Worrying.

But it’s the fact that soy contains estrogen-like compounds and the concerns around the hormonal effects on the body that are the most worrying. Studies are ongoing but looking at what the concerns are they are definitely worth paying attention to:

From my own research I simply have not found enough evidence in favour of consuming soy when weighed up against these concerns. I generally try to be objective and unbiased when looking at dietary theories and nutrition crazes but I would urge anyone who consumes soy regularly to do some research and make up their own mind. A quick web search on ‘the dark side of soy’ or ‘the dangers of soy’ will bring up plenty of links to studies and food for thought. Obviously avoid soy altogether if allergic to it otherwise it could be worth cutting down to a couple of times a week or looking for replacements.

Of course some people may be able to tolerate it better than others, especially those who have been raised to eat small amounts of good quality, fermented soy on a daily basis like the Japanese. However even in Japan and China soy is mainly used as a condiment or for flavouring and not as a complete substitute for animal foods. Personally I occasionally eat fermented soy like miso soup or tempeh. I never really liked tofu. Earlier experiments with consuming soy daily resulted in acne along my jaw and digestive issues. It took me a while to link the symptoms to my daily soya latte but as soon as I stopped taking soya milk the symptoms cleared. Now I use coconut milk or homemade almond milk instead. Delicious. There are always options!