The Yin and Yang of it all

Eating to balance yin and yang has been the Chinese way of eating for centuries, a concept which later became key to macrobiotics. So what does it mean? Balancing yin and yang is about balancing the energy of food, as opposed to balancing certain food groups. Yang foods are considered to be more heating to the body and dense energetically, while yin foods are more cooling, lighter in energy and with higher water content. The Chinese ideal is to eat both types of food to keep the body in balance. 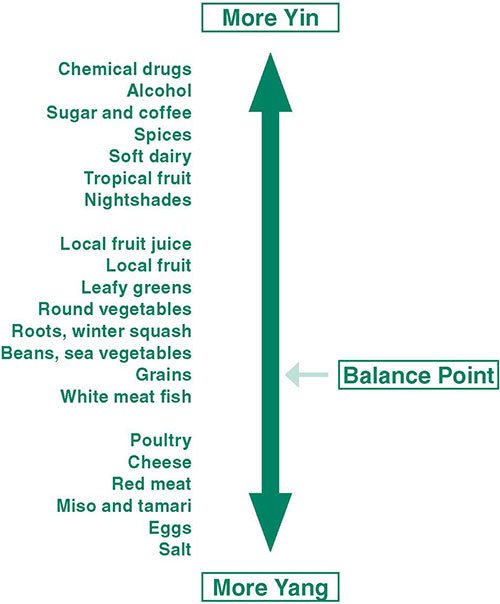 Chopped, blended, pureed or juiced foods cause them to become more yin in nature, while whole foods are more yang. Freshly cooked food is far more yang in almost all cases. Processed, refined, old, stale, wilted, or spoiled foods are much more yin. Vitamins, herbs, superfood powders or pills and protein powders are all extremely yin.

Understanding yin and yang can be extremely helpful when dealing with symptoms that show imbalances in the body. A feeling of lethargy or of being ungrounded could mean too much yin while feeling stressed or experiencing fever could mean too much yang. Assessing cravings is also a good way to check imbalances. For example: craving sugar or alcohol could be from eating too many yang or heavy foods like meat, or equally due to too much yang activity or stress. Craving salt, cooked or dry foods (all yang) could be from too many sweet, raw foods or liquid (all yin).

The tendency for people today is to be too yin. Common yin imbalances include yeast / fungal infections, depression, infertility, diabetes and cancer. Yang related diseases are more about inflammation and excess heat in the body and show as heart disease, high blood pressure and liver disease.

Refined foods, chemicals, toxins, drugs, alcohol and sugar all play a big part in yin imbalances. But for someone who is considered healthier, excess yin can be caused by a vegetarian diet composed mainly of raw food, juices and superfoods. This type of diet may feel good initially but if someone has a yin imbalance and is ungrounded, has yeast infections or depleted in energy, then eating too many yin foods will only be harmful in the long term.

So consider the whole picture to balance – climate, food and even yoga practice. Yin yoga can balance excess yang. Yang foods can balance excess yin. A good way to stay balanced is to mainly eat foods that sit in the middle of the chart and to adjust according to seasons.

Similar to Ayurveda, yin-yang balancing really comes down to knowing yourself and eating to best suit your own body type and symptoms, and according to the climate and season you’re living in.