To Squeeze or Not to Squeeze? That’s the question

Home  /  Articles  /  To Squeeze or Not to Squeeze? That’s the question
by
David Keil

This month’s newsletter article comes out of a recent trip to the Midwest. I was at a new studio with new students and hosts. This piece is actually a request from one of the hosts, Evan at Tapas Yoga Shala. As always on the first day of practice, I mostly watch and get a sense for what I want to work on with any of the students over the course of the 5 days of mysore classes.

From my point of view there is nothing more interesting than the work of observing the person, their practice, its quality, clarity, focus or complete lack thereof. I watch through the lens of my own experience and understanding of both the practice and my anatomical education and understanding. By nature I’m a problem solver, just ask any of the hosts that have had me fix their computer, network connection, or printer trouble on top of my normal presentations of anatomy or Ashtanga Yoga. It’s a similar approach that I took when doing bodywork and therapy with clients in chronic pain. I would try to understand the problem, and treat it, not just the symptom.

In terms of the practice however, I don’t see things as broken and must be fixed. Things are not so black and white. In the practice and development of asana practice there are stages, levels, understandings, realizations, and deeper awareness on many levels. Instead of black and white issues, I see patterns. Patterns that are either assisting someone in their personal evolution through their practice or getting in the way. This point of view allows space for the individual’s own progression through an individual asana or an entire practice.

It’s when patterns are getting in the way at any level that I decide I want to do something about it. These are patterns that for one reason or another I want to shift, nudge, or completely change based on a number of factors. They can also be on any level, physical, mental, emotional, or energetic. Enter the over squeezed buttocks!

Now, I’m guessing that Evan won’t mind me using his name in print, and hopefully I’m right. The truth is, he’s an advanced practitioner and any changes to his practice were simply detailed nudges that I wanted to make, not major changes at all. The nudge and the work required, subtle and simple changes. As we all know, subtle work in yoga practice can be the most difficult.
The only pattern that I really noticed was “squeezing of the buttocks”. It is a common enough pattern to observe in our own practice or in our student’s practice. Some teachers say to squeeze your bottom tightly in your up dog, others to totally relax it in your up dog. My question is why do either? What are the reasons for advocating either and more importantly, how does it relate to the rest of the practitioners practice? 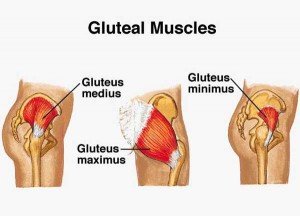 On that first day watching Evan go through his practice, I realized that I would probably just adjust him in some of his more advanced asana and support what he was already doing. I did notice that he contracted his buttocks kind of strongly in his up dog, but was happy enough to wait and see how things evolved. After all, squeezing to that degree may actually be exactly how Evan needed to do his up dog.

It wasn’t until I saw him doing his backbends and then his drop-backs from standing into a backbend at the end of his practice that I realized that I would intervene and nudge this pattern a bit and see what happened.

What I noticed in his backbend at this point were common patterns that we see in many backbends. Evan was not doing any of this to an extreme; in fact it was minor but obvious enough to me. The first pattern in the backbend itself was where the knees were in space relative to the feet and ankles. They were in front of them by a few inches. This tells me that there is still work to do on the hip flexors such as the quadriceps, adductors, and psoas as well as the shoulders potentially. In addition, the knees tended to be a bit wide relative to the feet. This is another sign to me that the hip flexors need to be more open.

Why are both of these indications of tight hip flexors? The body unconsciously resists the knees moving toward the shoulder end of the pose when the hip flexors are tight. It does this because the more you straighten your leg with tight hip flexors the more likely you will get compression in your lower back because the tension tends to pull the pelvis down and forward adding to a stronger lumbar curve.

When the knees are falling out a bit it’s a way for the body to unconsciously avoid the tension that remains in the hip flexors. As they fall out, the line of pull that the hip flexors have on the pelvis gets put at an angle, reducing the effect of these tissues pulling the front of the pelvis down and forward. If the knees come into line the tension usually increases and places more pressure on the front of the pelvis, which leads to more pressure in the lower back.

What was interesting is that the same pattern of knees falling out tends to be used as a tool for dropping back from a standing to backbend position. People spread their feet wide (he wasn’t), and let the knees fall out to avoid the pressure in the lower back and the tight hip flexors and even use the outer edge of the foot as a fulcrum for dropping back and coming back up (he wasn’t doing this). His feet did turn out slightly but not near the point of teetering on them.

I hate to use the words every time, however, almost every time you find someone with their knees wide in a backbend or a drop back you are going to find a buttocks that is also extremely tight. When the buttocks is overly engaged it will abduct the femur and external rotate it. It is difficult to balance the gluteals ability to help extend the joint and at the same time not adding too much external rotation.

Well there are good arguments to be made on this end. The most obvious is that by engaging your gluteals and buttocks muscles in general, you encourage more hip extension, which is needed for a deep backbend. This is true. The gluteals help create hip extension which in turn leads to a deeper backbend.

I have also heard from a few students, not many, but a few, that squeezing their buttocks actually releases their back. It’s hard to argue with someone’s personal experience, especially when they have an established practice. People do have different anatomy and this may be the simple answer to why people have different experiences of doing the same thing in their practice.
We could also argue for squeezing in another way. We could encourage engaging the adductors of the thigh to undo the overly tight buttocks. The adductors are known for being both adductors as well as internal rotators of the hip joint. The exact opposite of what we find from the gluteals. Perhaps working them together balances the leg in the middle of the two extremes. The idea would be that we take advantage of the gluteals ability to help extend the hip joint, but not let it use it’s function as an external rotator. Subtle, but possible.

The answers that come up for me surrounding this question is first, how the squeezing fits into the rest of the persons practice and their own experience of it. In other words, does it lead to other “negative” patterns? Negative is on a continuum here, not a static negative or bad thing.

I might ask other questions or observe other parts surrounding the squeezing of the buttocks. In up dog, does it make it seem like the person is only bending in their lower back? Personally I like to see an integrated movement through the spine, which includes as much upper back as possible.

More importantly, does the squeezing in a place like up dog then train these muscles to contract in places where they either don’t need to? Such as a drop back, or the entire time you’re in a backbend. In these moments does that pattern then lead to a further avoidance of the hip flexors that actually need to be lengthened more anyway?

The second is for those students (usually beginners and often runners or athletes) who have really tight hips. As I’ve already shown in the lotus prep video, the gluteals and deep rotators are highly involved in lotus type postures. Every time these students contract their buttocks in an upward facing dog or a backbend, they are encouraging tension into the very muscles that need more softness and length to do the lotus type postures.

For Evan, who is already aware of and has already done loads of work on this pattern, the question becomes can we un-train that pattern of buttocks contraction to the next level. The start of the undoing can happen in upward facing dog. Is it necessary to squeeze your buttocks there? No. I don’t think it is. Does this mean you shouldn’t? No. It doesn’t, it’s about how and when you do it that is creating a pattern and whether or not that pattern is manifesting itself negatively in other places. If it were a brief squeeze at the end of an up dog, I wouldn’t change a thing unless the person had some complaint or injury that might be related to it.

Could Evan shut off his gluteals when he was in his backbend and/or dropping back? Yes he could. Did it reduce the amount of outward rotation and abduction in his legs as he dropped back? It did. Was it harder to do this way? Yes, especially when it’s different than the way you’ve been doing it for years. Could he maintain that without my hands helping to hold his thighs in and internally rotated, not sure but at least he has something to work on!