Locally produced raw honey is believed to prevent symptoms of seasonal allergies, such as hay fever. Eating local raw honey exposes you to small amounts of allergens to help your body build immunity to the allergens. It is best to find local raw honey that is produced as close to home as possible as it is more likely to contain the same allergens that you are exposed to on a daily basis. Raw honey has many antibiotic properties and helps boost your immune system. 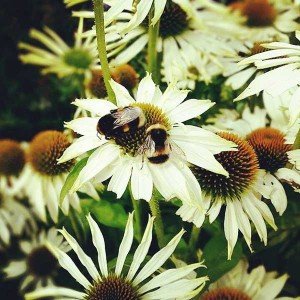 I have become pretty interested in bees as of late and how our eco-system is under a real serious threat. Hence I have been researching the benefits of locally produced raw honey.

There are two main factors which determine the rawness of honey: temperature and texture.
In my best David Attenborough voice, let’s get inside the beehive. Bags being queen bee. When honeybees are at work in the hive their collective body temperatures rises and warms the honey. The temperature of an active hive is about 95f and therefore enzymes which give the honey its nutritional and beneficial qualities are alive and raw. Once the temperature of the honey does not rise past 95f the honey has not been pasteurised. However once you heat honey such as use it in baking, the heat destroys the enzymes and chemically changes the honey. The honey is still sweet but has lost all of its nutritional value and is no longer raw.

When honey is harvested from the honeycomb it leaves behind chunks of beeswax. When most of the honey liquid is removed there are little blobs of wax which are further removed by a process of straining. This process results in clearer golden liquid called “pure honey”. As long as this honey has not been heated past 95f it is still technically raw. Straining can be done through a cheesecloth allowing pollen to pass through the material as it is small enough therefore retaining its active properties. However filtering honey removes significantly smaller particles, namely pollen and the honey is therefore further removed from its raw status. Pressure filtering is doing by large-scale operations that mass produce bottled honey. The temperature is usually quite high therefore pasteurising the honey.

Raw honey does not mean it is organic my dear friends. Organic honey is when the flowers that the bees collect the nectar from have not been sprayed with chemicals or pesticides. How can a beekeeper know where his bees go to collect their nectar? Bees usually travel for up to five kilometres to look for flowers to harvest. If they need to they can travel up to eight kilometres. This means that in order to call your honey organic all flowers in a five to eight mile radius surrounding the beehive must be organic. That is pretty near impossible unless you are Darina Allen in Ballymaloe, Co Cork in Ireland with the largest organic farm in Europe.

Perhaps all this information about honey is wrecking your buzz, pardon the pun. I am glad it is. Ignorance is bliss and who is suffering as a result? Our generation is already feeling the effects. It is going to be our children’s generation and grandchildren’s generation that will feel the real brunt. You can make a difference this week with one small step. Next time you are shopping for honey I urge you not to buy the cheapest option. Stop and think. Do you know where it was produced? Is it raw? Is it really organic? Are you supporting your local beekeepers? Do you want to protect yourself from local seasonal threats? Support your community and keep your local beekeepers buzzzzzzzzy. 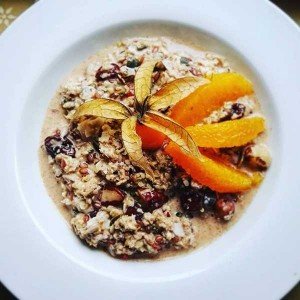 Serves 4/5 lucky ducks
Takes one sleep and a bit

Toast all the seeds with the exception of chia seeds. Toast all the nuts together. Toast the coconut until lightly browned. In a large bowl mix together all the ingredients apart from the yoghurt. Cover and refrigerate preferably overnight or for one hour minimum. Be warned it will thicken considerably. When serving add all the yoghurt and mix well. Top each serving with a spoonful of your sweetener of choice and a dash of cinnamon.

Fresh fruits that work well sprinkled on top for extra yumminess are blueberries, raspberries and when in season figs and nectarines are delish. It will keep covered in the fridge for two days. If eating on the second day stir in a little extra yoghurt or juice to loosen the mixture.

Check out more from Tara-Lee on her magazine page!