Your Shoulders in Downward Facing Dog

I think we can all agree about one thing with regard to the shoulders in downward facing dog. None of us like to have our own or see our students shoulders stuck up in our or their ears. How do we get our shoulders out of our ears? In addition what is the effect of this on our elbows, wrists, and hands? Or is it the other way around? Do our hands, wrists and elbows have an effect on our shoulders?

All of the “separate” elements that make the arm are actually linked together. The “separate” parts are the scapula, shoulder joint, elbow, wrist, and hand.

The hand/wrist, elbow and shoulder joint all create a kinematic chain of joints. In plain English this means that they have an interrelationship with one another. In other words, when your hands are on the floor, if your elbow bends, then both your wrist and your shoulder joint have to change. If you change the position of your hand, your elbow or shoulder joint may change.

This same concept is also true of the leg, however there is one critical difference. At the proximal (top) end of the leg is the pelvis and at the proximal end of the arm is the scapula. The pelvis doesn’t have the ability to move around in the same way that the scapula can move. The major difference here is that when the scapula moves it also changes the position of the shoulder joint and humerus in space changing its relationship to the other elements of the arm.

The Scapular and Shoulder Movement

I personally like to set the scapula up first in downward dog. It’s the part that seems to attract our attention first anyway.
The action of moving the shoulders away from the ears is usually seen and described as depression (downward movement) of the scapula. I believe this to only be part of the story. The depression that we cue and see is actually mixed together with a combination of protraction (around the front) and an upward rotation of the scapula. Actually, the scapula is already upwardly rotated if the person is in down dog. But when we add in the protraction, the largest part of the shoulder, the deltoid seems to externally rotate.

This is due to the movement of the scapula moving the humerus and shoulder joint in space. It is more externally rotated but as a result of the movement of the scapula not necessarily the shoulder joint. My sense is that the protraction part is often the one that’s missed out or less commonly cued. The reason we want to include some protraction is because it activates one of the most important stabilizers of the scapula, the serratus anterior muscle. I’ve discussed the importance of this muscle in other posts such as so, you want to do a handstand and in the more recent piece about headstanding.

We often forget about how important stabilizing a joint or structure can be. We naturally think of muscles contracting and creating movement. Activating and stabilizing the scapula sets a stable structure for the humerus to move relative to. To be fair, there are a number of other muscles that also help to stabilize the scapula but none better equipped than the serratus. These muscles would be the trapezius, rhomboid, and pectoralis minor.

With the scapula stabilized we also create a stable foundation for the body to be supported above the arms. This allows us to create movements at the other joints more efficiently. Instead of rotating our upper arm at the shoulder joint by itself, the movement and then stabilization of the scapula has already done some of this work for us. This means, less effort is required in creating all of the external rotation we want in the upper arm. 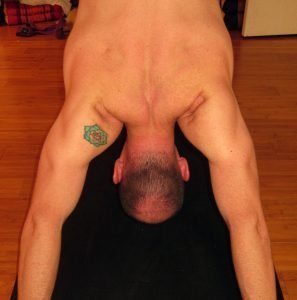 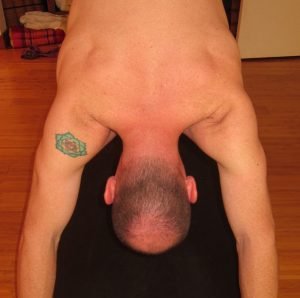 Scapulae protracted – notice the change in shoulder and in elbow from just moving the scapulae.

The Elbow, Wrist and Hand

The crease of the elbow is often cued to be facing forward in downward facing dog. I’m personally not a big fan of this positioning. I feel that it encourages too much effort and movement in the shoulder joint itself without the scapula being involved. It’s also the part of the arm that probably shows the most amount of variation in natural shape and positioning. I think it is generally a bad measure of correct action and alignment.

I’m not saying that we shouldn’t use or pay any attention to the elbow either. As I already mentioned a change in any of the elements tends to affect the others. We can use the elbow to release the tension and then create movement in the shoulder joint. By bending and softening the elbow in down dog we can more easily find the right amount of movement or positioning in the shoulder.

I prefer to look at both the shoulder and then at the angle of the wrist crease. I would suggest that both of these structures are more likely to have or develop trouble over time than the elbow.

I tend to start with lining the crease of the wrist with the front edge of the mat. This means that as someone moves through the most common positions of chaturanga, up dog and down dog that their wrist is bending in a more or less right angle and forward and back.

But depending on what the shoulder looks like, I may be willing to adjust the hands by rotating them outward slightly. This tends to increase the ability of some people to open their shoulders and find space. I have had some dramatic changes in shoulder pain from simply rotating people’s hands outward slightly and lining up their wrist or beyond and angling the line of the wrist outward slightly.

What this also means is that it’s not their middle finger that is pointing straight forward. This is a generally well-accepted element of alignment and I’m sure some of you will disagree with anything but the middle finger pointed straight ahead. I believe it is a good starting place and then we might have to adapt to the individual if it turns that it doesn’t benefit them. 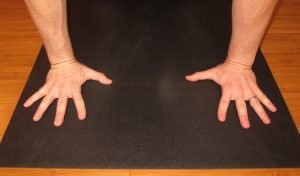 Middle finger is pointed forward – notice line of wrist – This is how my anatomy works. 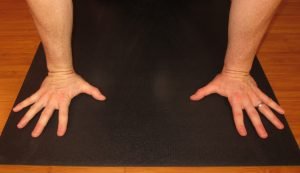 There is no one perfect “right” way of positioning your hands, wrist, shoulders and scapula. Even though I may be suggesting you do or say something different from what you do now, I’m not suggesting that this is the “right” way. What I am saying is that we may want to look at whether we actually fit into the standard alignment points of the shoulders, elbows, and wrists in downward facing dog. Or at the very least start to think of these elements as being inter-linked and changing one can affect change in one of the others.

I personally like to engage and move the scapula first because the muscles that control it are larger and can help hold the entire shoulder girdle more efficiently than say the muscles that only rotate the humerus. In my experience this is more efficient for holding the posture more comfortably. It also then allows the muscles that rotate the humerus to function more easily in adding any bit of rotation they may need. The idea is that each joint contribute it’s part in an efficient way. Not one joint trying to create the movement of the entire chain.

When I’m teaching, I don’t assume that everyone should have his or her hands, wrist, elbow or even shoulders in the exact same place as everyone else. Their personal anatomy and tensional patterns in their musculature are going to be what decide that ultimately. So it’s not like I go around changing everyone. If I see what looks like stress running through someone’s wrist, I line that up and let the hand express the angle of the wrist. If it’s the shoulder that needs more space, I might also change the hand or bring to the person’s awareness, their ability to move their scapulae if needed. We have to be willing to experiment and stay open, not just to being right, but also to being wrong.

If you want to find your own serratus anterior you can feel this muscle activate by doing a couple of really simple exercises. Take a childs pose, arms forward. Let the elbows be bent slightly and resting on the floor. If you have any type of pinching feeling in the shoulder itself while doing this, bend your elbows more by bringing them back toward your body.

Now, press your elbows into the floor and bring your mental awareness to the sides of your body just in front of your armpit. Hopefully you can sense the contraction of a muscle there, which would be your serratus anterior.

Don’t stop there. Move into downward facing dog and put a slight bend in your elbow to help us feel this again. After you bend your elbows slightly, imagine you are sending them down toward the floor as well as toward one another in front of your face. You shouldn’t have to use one hundred percent of your strength to make this happen or to feel the sensation; twenty to thirty percent should suffice. Can you feel it

Trying working with this in your down dog and see where it takes you.